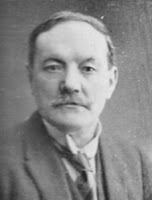 Biography:
An accomplished forward with Londonderry-based St. Columb’s Court, James “Jemmy” Wilton won six caps while playing with the northwest side. He aided them to several North-West Cup Finals where Court battled with Limavady for regional supremacy. Wilton’s other cap was won during a brief spell with Cliftonville. He played for the Amateurs in the 1890 Irish Cup Final, scoring in a 2-2 draw against the Gordon Highlanders Regiment before the replay was lost 3-0.

In a five-year international career with Ireland, Wilton suffered some serious hammerings. It wasn’t until his seventh and final cap that he tasted success, as Wales were defeated 4-3 at Cliftonville. In an end-to-end match the goals had been shared evenly (John Peden scoring a hattrick) until Wilton slotted home Ireland’s winner in the 82nd minute.

For all his achievements on the field of play, Wilton’s activities after his playing days ended are perhaps more notable. He became actively involved in football administration, chairing the Irish Football Association’s Improvement Commission in 1909. From 1914-1945 he was IFA President, a role initially combined with the position of Chairman until 1923. He was among the IFA’s delegation which met with the Football Association of the Irish Free State in an attempt to reconcile the two Associations following "the split”. Wilton was much credited for his conciliatory tone which took the relationship between the IFA and the FAI from non-existent to merely extremely frosty. In 1929 he was also a vocal supporter of the admission of his hometown team, Derry City, to the Irish League.

A prominent member in the early days of the Ulster Volunteer Force in the Londonderry area, like many fellow UVF men of the day Wilton volunteered to serve in the British Army during the First World War. He attained the rank of captain, was badly wounded at the Somme and was awarded the Military Cross for bravery (see below).

After the War he took to politics. He was elected as a councillor in Londonderry as a “British Legion Candidate” and served two terms as Mayor as an Ulster Unionist from 1935-1939. In 1937 he received a knighthood for his services to Northern Ireland. Although a "staunch unionist", on his death in 1946 it was reported that “there was not a Nationalist or Catholic who had anything but the kindliest words for Jemmy Wilton”.

Newspaper clipping sourced by markinbelfast from the OWC Forum. 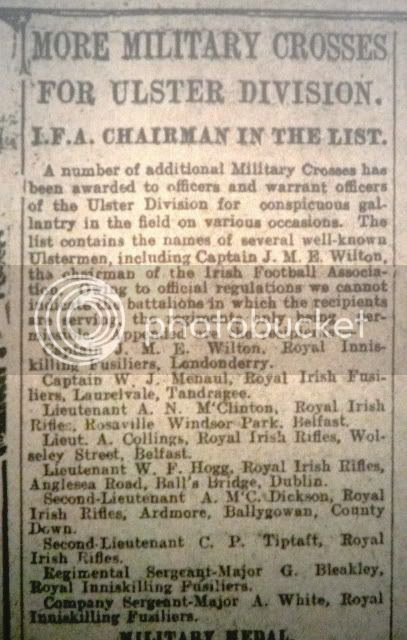