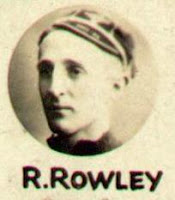 Biography:
The son of an army major, Dick Rowley spent his childhood in a number of barracks. He excelled at a number of sports, representing Wiltshire and Hampshire at cricket, golf, tennis, 100 yards, hurdles and motoring. Further, while on active service Rowley won the DCM.

Rowley first took to football with the Fulwood Barracks team but on attending Taunton College Grammar School he was forced to switch to rugby. With his schooling over he returned to football and played as an amateur with a number of clubs and played his first League games during a brief spell with Swindon Town.

In May 1926 Rowley signed for Southampton and quickly struck an understanding with Bill Rawlings and by that November he had been awarded his first professional deal. Regarded primarily as a "schemer" capable of working space from deep, he was also an adept goalscorer. In the Saints' run to the 1927 FA Cup semi-final he scored five goals and began to attract scouts from more "glamorous" clubs. In 1929/30 he managed 25 goals in as many games, including four away to Bradford City and hattricks on successive games against Nottingham Forest and Chelsea.

Capped for the first time in a 2-2 draw against Wales in February 1929, it was his role in the same fixture a year later for which Rowley is best remembered, his passes setting Ireland on the way to a 7-0 victory and Joe Bambrick to a double hattrick. Rowley scored his first international goal in front of a 40,000 crowd at Windsor Park on the occasion of his second cap - indeed he was one of the few Irish players to earn credit as Scotland "stronger in every respect" cruised to a 7-3 victory. In all Rowley won four caps while a Southampton player.

In February 1930 Tottenham had an irresistible £3,750 bid for Rowley accepted. It was not to prove a wholly successful move as he was largely restricted to the reserves though Rowley did add a further two caps to his collection while a Spurs player. When he left White Hart Lane behind after a little under two years Spurs still netted a sizable £5,000 fee from Preston North End in a deal that also included Ted Harper.

In 1932/33 Rowley laid on many of Harpers' 37 goals and claimed five himself as Preston fell well short of the Second Division promotion spots. In the following campaign the partnership was split up as Harper left to join Blackburn mid-season and injuries restricted Rowley to just five games as Preston claimed promotion to the First Division as runners-up. Unable to face a campaign in the topflight, Rowley retired in the summer of 1934.

With his playing days behind him, Rowley became a coach with the Lancashire AFA in July 1937 and in the 1940s shared his skills and knowledge with RAF Uxbridge.

Anonymous said…
Love the football card pics that you have for Rowley. Do you have details of what card collections they were from?
Sunday, June 23, 2013

jcd said…
Can't offer too many details I'm afraid. The head shot is from a postcard celebrating the 7-0 win over Wales in 1930. The caricature was reproduced from a Southampton Who's Who.
Sunday, June 23, 2013