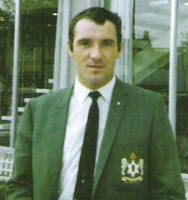 Biography:
Danny Trainor was one of two Crusaders players, Alan McNeill was the other, who joined the Glentoran squad for the Cougars tour of 1967. Ironically, the two Crues forwards had been the ones to deny the Glens the Irish Cup in their historic 1966/67 campaign, both scoring in a 3-1 Final win for the underdogs.

Trainor’s early career had seen spells with Distillery and Coleraine before he joined Crusaders as a wing-half. It was in that role that he played in a 6-0 Co. Antrim Shield win over Larne in 1965. That same season he also played in the Gold Cup Final – a match lost 5-2 to Derry City.

When the Crues made the Gold Cup Final again in January 1967, Trainor had moved upfield, playing at inside-right. Again however the Hatchetmen suffered a 5-2 reverse, this time at the hands of Glentoran, with Trainor having the misfortune to give away a penalty for a tackle on Walter Bruce. That season Trainor scored over thirty goals, including the strike in the Irish Cup final revenge over Glentoran.

Having been capped at Amateur level, Bertie Peacock included Trainor in the Northern Ireland Under-23 team for a match against Wales in February 1967. Although bad weather forced the match to be abandoned with the score 2-1 in the favour of the Irish, Trainor had done enough to convince Peacock that he was a suitable deputy for Johnny Crossan in the full Northern Ireland set-up. Consequently, with Crossan ruled out, Trainor won his only Full cap in a 0-0 draw with Wales at Windsor Park in April 1967. He was joined in the line-up by future-Cougar teammates Walter Bruce and Arthur Stewart.

Trainor’s time as a Cougar was something of a mixed-bag. He had a goal controversially ruled out as off-side late on in the opening match, a 1-1 draw with (Boston) Shamrock Rovers, and in the ensuing melee player-manager John Colrain allegedly punched the linesmen and was suspended. In the second match Trainor did score after just two minutes of a match against Sunderland (playing as Vancouver Royal Canadians) as the Cougars claimed another highly credible 1-1 draw. His only other goal of the tour was in a 6-1 humiliation by ADO Hague (aka San Francisco Golden Gate Gales) who included future Rangers manager Dick Advocaat among their goalscorers. Finally, Trainor’s tour was brought to a premature close as he was sent-off for fighting during a 0-0 draw with Stoke City (playing as Cleveland Stokers).

A season back in the Irish League brought Trainor a second Irish Cup success as Crusaders, again the underdogs, shocked the big-boys on the big day; Linfield defeated 2-0 in the final at the Oval. With that, Trainor left Seaview behind, moving to English Third Division side, Plymouth Argyle. He never really settled in English football, the goalscoring touch that had made him such a threat in the Irish League deserting him as he scored just three times for the Pilgrims.

After just a few months in England Trainor returned across the Irish Sea, signing for the then dominant side in the League of Ireland, Waterford. In December 1968 he made a scoring debut, the first of twelve league goals that season, as Waterford claimed the title. He later played with St Pat's and Drogheda United. Although he was not retained by Drogheda at the end of the 1973/74 season, Trainor was travelling with some of his ex-clubmates from a pre-season training camp in the first week of August 1974 when they were involved in a head-on collision. Trainor was killed instantly and the two occupants of the other car, a husband a wife, also died.

Anonymous said…
ONE OF CRUSADERS ALL TIME GREATS.TOTAL GENTLEMAN BUT HARD AS NAILS IN THE GRET CRUES TRADITION BUT SUPPER SKILFUL AT THE SAME TIME.
TRAGIC EARLY END TO ONE O9F THE BEST.LONG LIVE THE KING.
Monday, January 20, 2014