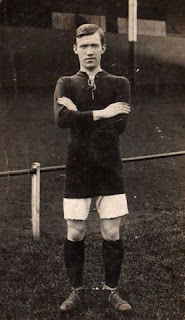 Biography:
A free-scoring inside- or centre-forward, Jimmy McKnight made a single appearance for Glentoran in the 1907/08 campaign and was still largely a second player the following season when he scored six goals in ten games. Indeed, in March 1909 he was the scorer of the Glentoran IIs goal which defeated the “Firsts” in the Co. Antrim Shield and went on to score a hattrick in the Final win over Cliftonville. That same season he also claimed winner’s medals in the Steel & Sons Cup and Intermediate Cup with the Seconds.

Rewarded with a more regular spot in the Glentoran firstteam for 1909/10, McKnight continued to show his class in front of goal – he scored 16 times in 22 games. The season after that he claimed his first medals as a firstteamer – the League title, City Cup and (another) Co. Antrim Shield – and was rewarded with selection for the Irish League in a 4-0 defeat by the Southern League at Upton Park.

By the time McKnight left the Oval mid-way through the 1912/13 season he had netted 23 goals in as many games, and had done enough to win further League and City Cup winner’s medals. He joined Preston North End in early 1912 for a fee of over £1,000. After just two games for North End he was back in Belfast for his first international cap. He marked the occasion with a goal from the penalty spot in a 4-1 defeat by Scotland. On his return to Deepdale he scored in successive League wins, 3-1 over Liverpool and 3-0 over Sheffield United, and looked like helping Preston avoid the drop to Division Two. Alas, the goalscoring touch deserted him at just the wrong time and the team were relegated along with Bury.

Although Preston bounced straight back as Division Two Champions McKnight played no real part. He made just three appearances, failing to regain his form, before returning to the Oval in October 1912. He quickly set about finding his form of old, scoring some vital goals in the Championship run-in as Glentoran came from behind to pip Distillery to the title. He also scored in a 5-1 Irish Cup semi-final win over Belfast Celtic, but Glentoran were to be disappointed in the Final for the third consecutive time, Linfield winning 2-0 at Celtic Park.

While back at the Oval McKnight travelled to Dublin for his second Irish cap, coming in as a replacement for Dinny Hannon. Again it was against Scotland, and again he scored, but, as with his first cap, he finished on the losing side. In May 1913 McKnight returned to England for a second go at the Football League. He joined Nottingham Forest of the Second Division, but once again he failed to make his mark. He battled hard to make an impact, but just nine appearances and no goals told the story of a season in which Forest finished rock-bottom of the League.
McKnight's most telling contribution whilst a Forest player was saving the life of a boy. In the summer of 1913, while fishing in Ardglass Harbour, he dived from the pier to drag the drowning lad to safety. On the day of the rescue he returned home without fanfare, he was later identified and his efforts were rewarded with a certificate for life saving from the Royal Human Society which was presented to him by the Mayor of Nottingham ahead of a game against Blackpool that October.

Once again McKnight returned to the Irish League. He joined Belfast Celtic and was a integral part of the side the claimed the League title and runners-up spot in the Irish Cup and Charity Cup, both behind Linfield. He also won his second selection for the Irish League XI, playing in a 1-1 draw with the Southern League at Swansea in October 1914.

Signed by Distillery for the 1915/16 season following Celtic’s withdrawal from football for the duration of the First World War, McKnight added just one more honour to his collection while at Grosvenor Park. That was the 1916 Belfast Charity Cup, the 1-0 Final win over Linfield offering some measure of revenge as the Blues had defeated the Whites in that season’s Gold Cup play-off. Distillery also finished runners-up in the Co. Antrim Shield in 1916 and the Belfast & District “War-Time” League in 1917 during McKnight’s time.

Jimmy McKnight joined Willowfield in 1918, but it was to be a sadly short association. He died of pneumonia in March 1920, when just 27 years old.

(Leeds Mercury, Wednesday, October 14, 1913)
A FOOTBALL HERO.
HOW A NOTTS. FOREST PLAYER SAVED A DROWNING LAD.
James McKnight, the Nottingham Forest Football Club’s Irish international forward has been awarded the Royal Humane Society’s certificate for life saving, and formal presentation by the Mayor is to take place on Saturday, when Blackpool visit Forest.
McKnight was fishing in Ardglass Harbour during the summer holiday, when a boy fell into the water. McKnight dived from the pier, twenty feet into the water, reached the drowning lad, and was hauled by spectators with a rope up the harbour side.
McKnight went home immediately afterwards, and it was not for some time that the hero’s identity was established.