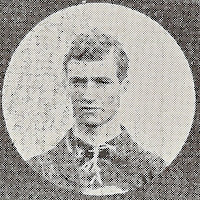 Biography:
Jim McAuley burst on to the Irish League scene as a teenager with Cliftonville. He was just eighteen when he played in his first Inter-League match, a 5-0 defeat by the Football League, and made four more appearances without ever tasting victory. He did manage two goals for the Irish League, most notably in a close-fought 2-1 defeat by the Scottish League at Grosvenor Park. In that time he also aided Cliftonville to two Irish Cup Finals, scoring in the 1909 2-1 replayed Final win over Bohemians in Dublin, and a League title success in 1910.

In 1910/11 McAuley played a small role in Rangers’ title success, he played a single game for the Glasgow club, a 1-1 draw at Third Lanark in October. From there he moved on to Brighton & Hove Albion, before arriving in the Football League with Huddersfield Town. He made his Football League debut while still an unregistered player as the inexperienced club administrators, in their first season in League football, failing to confirm that his registration with Rangers had elapsed.

The initial difficulties surmounted, and fine paid, McAuley went on to give Huddersfield good service. In 1911 he became the joint first Town player to win international recognition when he faced a Wales side that featured club-mate, Charlie Morris. A month later he scored his first international goal in a 2-1 defeat by England at Derby. A regular in the Ireland side for two years, he won all of his six caps while with Huddersfield, all-but-one at inside-left. He finished on the victorious side just once, England dispatched 2-1 at Windsor Park in 1913.

McAuley transferred to Preston North End for £850 mid-way through the 1913/14 season. His move brought Huddersfield another fine from the Football League – he had incorrectly been listed as a free agent, and therefore not subject to a fee. After making his Preston debut in a 1-0 home defeat by Liverpool McAuley settled quickly into the forward line, scoring seven goals in 22 appearances, just not enough to help the club pull clear of relegation. He had a fantastic season in Division Two, scoring sixteen times in 37 games, as Preston bounced back at the first time of asking.

In good form, McAuley’s career was put on hiatus for the duration of the Great War. During the War years he returned to Ireland, guesting with Belfast Celtic. On the resumption of League football in 1919 McAuley was on the books of Second Division Leicester City, and he played in their first match, the old Leicester Fosse club having ceased trading due to financial difficulties, a 2-1 defeat by Wolves at Filbert Street. He then played in the first ever season of Division Three with Grimsby Town before returning to the North-West where he finished his playing career with Lancaster Town and Morecambe.

Gretel said…
thats my great grandfather that is
Thursday, February 14, 2008

Gretel said…
The above comment was left by Andrew James Macauley, great grandson of Jim McAuley, using his partner's Blog profile. (Just to clear up possible confusion in the realms of sporting history).
Thursday, June 05, 2008