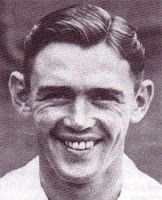 Biography:
Flying winger with a powerful shot, Jackie O’Driscoll enjoyed success in both his native Ireland and in Wales where he would later make his home.

Initially with Cork City, O'Driscoll scored for Waterford in the 1941 FAI Cup Final, though he still finished as runner-up. After a brief spell with Shelbourne he returned to his home-town with the "new" Cork United. Back in Cork he appeared in two more FAI Cup Finals, claiming a winner's medal against Bohemians in 1947, and also featured in League successes.

In June 1947 O'Driscoll transferred to Swansea Town in a £3,000 deal. A great favourite at Vetch Field, he helped the Swans to consecutive Welsh Cup Finals, a 2-0 defeat by Merthyr Tydfil in 1949 before missing the 4-1 win over Swansea a year later, and helped the club to promotion as Division Three (South) Champions in 1948/49. A fractued ankle during the 1950/51 season seemed to take the edge off O'Driscoll's game and he was released early in the 1952/53 season. 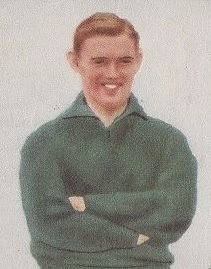 Capped by both the IFA and FAI, three times by each, O'Driscoll's first international appearance came in a 6-2 British Championship defeat by England in October 1948 as he appeared in each of the matches in that season's tournament. He made his Eire debut in a 1-0 friendly defeat by Switzerland at Dalymount Park, winning further caps against Belgium and Switzerland.

Later O'Driscoll played with Llanelly (now Llanelli), featuring in their 1953 West Wales Senior Cup win over Swansea. After retiring as a player in September 1956 he settled in Wales, running the Greyhound Inn in Reynoldston.