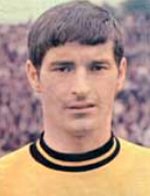 Biography:
A tenacious but skilful player, Dave Sloan also packed a powerful shot. Until his early-20s he worked in the shipyard and played amateur football with Bangor. In September 1963 Sloan won his second amateur international cap, against England at the Oval - he scored the winning goal to give Ireland there first win in that fixture for ten years and push the Irish towards the Home Nations Amateur Championship.

A little over a month after that match against England, Sloan was transferred to Scunthorpe United. He scored with a typical fierce shot from 25 yards on his debut for the Iron and over the next few seasons starred right across the forward line, but normally on the right wing where he his deceptive turn of pace and body swerve made him a real handful. An effective goalscorer, he scored a hattrick against Grimsby on the way to a seasonal total of 14 in 1965/66.

Early good form for Scunthorpe saw Sloan add an Under-23 cap to those he had previously won at Youth and Amateur level as he played at inside-right in a 3-3 draw with Wales in February 1964. He had to wait another four years, until after a move to Oxford United, to appear in a full international.

In five years at the Manor Ground Sloan's continued all-effort displays made him popular with the fans and in 1968 he scored the goal against Southport that clinched the Third Division title. In the opening match of the following season he scored Oxford's first ever Second Division goal in a 1-1 draw with Bolton.

In all Sloan won two Northern Ireland caps while with the Us and was proud to take to the field with stars such as George Best, Pat Jennings and Derek Dougan all of whom were playing at a much higher level than he was.

After finishing his League career with two years at Walsall, Sloan worked as a steelworker in Scunthorpe and later as a caretaker at a primary school in Burton. In 2004 Sloan hit the headlines when, 34 years after his last appearance, he finally received his international caps.