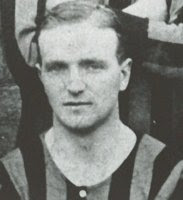 Biography:
“A neat dainty ball player” Charlie O’Hagan was born in Donegal, the son of a grocer, he attended St. Columb’s College in Londonderry to further his education. Whilst playing for the College team (St. Columb’s Court) he was persuaded to join Derry Celtic, who were newly promoted to the Irish League. After two seasons there he gave up his studies and moved to Liverpool, where he took up employment in the office of a large Spanish fruit merchant. He signed for Everton in March 1903 and soon moved on to Tottenham Hotspur.

O’Hagan won his first caps while a Spurs player, playing in a forward line that also included club-mate Jack Kirwan. At the time Spurs were members of the Southern League and O'Hagan, described as a "born entertainer", scored eight goals in 37 games for them between May 1904 and July 1906. The main goal of note that he scored for Spurs was on the 9th February 1905 when his strike knocked Middlesbrough out of the FA Cup. In all O'Hagan won five caps and scored one goal while at Spurs, before moving to Middlesbrough in 1906.

After just a few months in the north-east, his appearances limited by the presence of Alf Common, O’Hagan moved to Scotland with Aberdeen for a fee of £175. He became the first Aberdeen player to be capped by his country, taking his personal total to 11. O’Hagan thrived on the popularity he gained at Pittodrie and his partnership with outside-left Willie Lennie was regarded as one of Scottish football’s major attractions. He scored 24 goals in 112 Dons appearances before moving to Morton for £185 in July 1910 and he later had a short spell at Third Lanark.

O'Hagan served in France with the Highland Light Infantry during the Great War and was fortunate to survive. He was at the centre of some controversy in 1920 when he suggested that nine members of the Aberdeen team had accepted £15 each to throw a Scottish Cup semi-final against Celtic in 1908. He quickly and publicly withdrew and aplogised for the accusation declaring it to be "entirely false, malicious and slanderous,"

O'Hagan was appointed manager of Norwich City for their debut season in the Football League in 1920/21. He resigned after the Canaries registered just four wins in their first 22 League games. Two years later he emerged as manager of Sevilla in Spain where he stayed for a season. He then became a journalist and sailed to New York from Londonderry on the 20th November 1928. He died there less than three years later.

William O'Hagan who played as goalkeeper for Ireland and St Mirren in the 1920s was Charlie's nephew.

Football Times
The 42
The Entertainer

Additional details and photo supplied by George Glass. Thanks also to Bertmart for the Sevilla pointer.