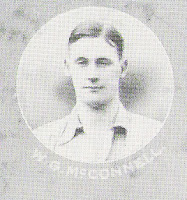 Biography:
Ireland’s right-back for the entire Home Nations campaign of 1914, when they won the title outright for the first time, Bill McConnell had a remarkable record at international level. His first game, played at left-back against Wales in 1912, resulted in a 3-2 win. The following year, installed in his favoured right-back role, he played in a 2-1 victory over England at Windsor Park – Ireland’s first success against their largest neighbours.

In all his six caps he finished on the losing side just once; 1-2 against Scotland in 1913. In a hard-fought and crowd-troubled match at Dalymount Park, his home ground, McConnell put in an energetic performance, and only the mis-firing forward-line denied the Irish a more favourable result.

On the domestic front McConnell was playing for Bohemians at a time of ups-and-downs. In 1911 he played in the all-Dublin Irish Cup Final defeat by Shelbourne. That same year Bohs, having finished bottom, withdrew from the Irish League. A year later they returned and in autumn of 1913 McConnell represented the Irish League in three consecutive matches (defeats by the Football League, Southern League and Scottish League).