Biography:
Tom Sloan was a lightly built midfielder, busy and pacy, who burst on to the Irish league scene as a teenager. In 1978 he was a key member of the Ballymena team that reached the Irish Cup Final, only to lose to Linfield, and was rewarded with an Under-21 cap against the Republic of Ireland in Dublin and the title of Ulster Young Player of the Year. Also a member of that Ballymena side was Tom’s elder brother John, who would spend several years on the fringe of the Northern Ireland side without ever winning a cap.

In the summer of 1978 Manchester United pipped Spurs for Sloan's signature in a £20,000 deal. His Football League debut came early as he deputised for Lou Macari in a 2-0 win over Ipswich on 18 November 1978. He made a total of four League appearances that season (including one as substitute for Jimmy Greenhoff in a 5-3 home defeat by West Brom), and at the end of the season was called into the Northern Ireland squad. Danny Blanchflower awarded him his first cap in a 1-0 British Championship defeat by Scotland in May 1979. He made further appearances as a substitute against Wales and Denmark. Although he did stay in the thoughts of both Blanchflower and his successor, Billy Bingham, over the following three years, Sloan never added to his cap total.

Over the following three seasons Sloan made just eight more appearances for Manchester United, all but one from the substitutes’ bench, and at the end of the 1981/82 season was released. Signed by Chester, a club freshly relegated to Division Four, Sloan was a regular in a side that settled into mid-table solidity. In the Football League Trophy Chester enjoyed a superb run, Sloan scoring twice, including in an emphatic 5-0 win over Shrewsbury, before losing out to Lincoln in the semi-finals.

After five eventful years in the English game, Sloan returned home to sign for Linfield. He spent three seasons at Windsor Park and, despite his share of injuries, picked up a clutch of medals. Part-time football necessitated that Sloan return to his trade as a self-employed plasterer. In 1986 he left Linfield for Coleraine and in 1991 he played his final senior football back at Ballymena. 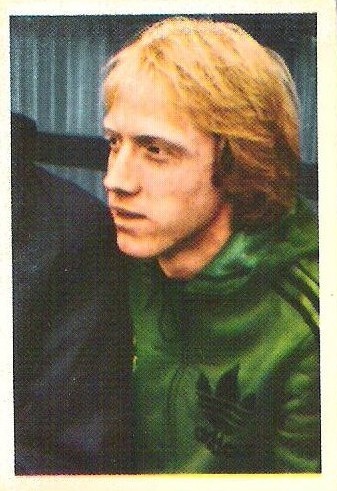 Anonymous said…
kinda proud of this guy..ragin he had no boys to follow on lol. but nice work dad.x
Saturday, January 31, 2009

Unknown said…
Hi my name is Tom Sloan! From Wales...Irish family and Man Utd supporter! Love reading about this legend!