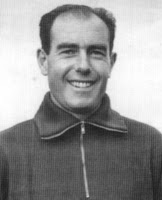 Biography:
An East-Belfast native, Sammy McCrory was signed as a professional by Linfield in April 1944 and made his début against Belfast Celtic, scoring in an 8-1 defeat. A “deliberate moving but highly gifted inside-forward”, he spent two full seasons at Windsor Park during the Second World War, during which time he twice won the Irish Cup. He scored two in a 4-2 Final win over Glentoran in 1945 and another goal the following year in a 3-0 defeat of Distillery. In all competitions at Linfield he scored 60 goals 91 appearances. In September 1945 McCrory scored the only goal for the Northern Regional (War-Time) League in a 1-0 win against the Combined Services.

Transferred to Swansea Town in October 1946 for a fee of £4,750, he could do little to aid the Welsh side in their fight against relegation. Despite scoring on his debut, they left the Second Division after a 21-year stay. Two years later he played 37 games, scoring 19 times, as the Swans waltzed to the Division Three (South) title by a five point margin. That same season he played in the Welsh Cup Final which resulted in a 2-0 defeat by Merthyr Tydfil.

Mid-way through the 1949/50 season McCrory found himself back in Division Three (South) with Ipswich Town. Making the same move was former Linfield colleague, Jimmy Feeney, and the £10,500 combined fee represented an Ipswich club record. McCrory was slow to settle in East Anglia, he scored just twice in his first twelve games, and he became the first ever Ipswich player to be sent-off in League football when given his marching orders against Aldershot in April 1950.

McCrory found his shooting boots over the following two seasons. He scored a hattrick at Crystal Palace in November 1950 and twice as Ipswich came from behind to hold First Division Tottenham 2-2 in the Ipswich Hospital Cup in 1952, but couldn’t do enough to lift the club above mid-table obscurity in the League. In August 1952 McCrory returned to Division Two, transferring to Plymouth Argyle. He struggled to find his form at the higher level, and in three seasons scored just eleven goals.

In June 1955 30 year-old McCrory joined Southend United back in Division Three (South). All these years on he remains a legend at Roots Hall and in 1957/58 he hit the goalscoring form of his career. In a season in which he scored 31 goals he was called up to the Northern Ireland ‘B’ side for a match against Romania. He "ran the show" and scored in a 6-0 win.

A month after his 'B' performance, at the age of 33, McCrory was honoured with his first Full cap - in fact he was the oldest post-war player to make his début for Ireland. The match, against England at Wembley in November 1957, saw several English players deride the Irish side, in particular the “old man” McCrory. The perfect answer arrived with a 3-2 win, with McCrory scoring to give the Irish a 2-1 lead in the 60th minute. McCrory was included by Peter Doherty in the squad for World Cup in Sweden but despite a number of injuries to other players and impressing in training, he never added to his solitary cap.

After 188 League goals in 457 games McCrory drifted into non-League football with Cambridge United. Later he returned to the Irish League as player-manager of Crusaders. On retiring from football, McCrory ran the Port O Call pub in Donaghadee.

Anonymous said…
Great - Sam is a lovely man and lives next door with the still glam Rita
Sunday, September 26, 2010

John McGoo said…
Sam McCrory played in the first game I ever went to. Southend v Norwich August 1958. Always a hero to me although I hardly remember him.
Friday, December 02, 2016

John McGoo said…
Sam was one of my heroes as a child. He played for Southend against Norwich August 1958. The first game I ever saw.