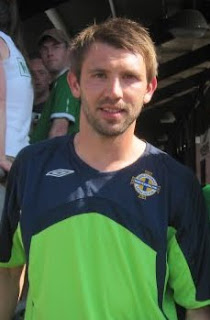 
Biography:
A player long-admired by Sammy McIlroy, Gareth McAuley made his ‘senior’ international debut in a ‘B’ match against Future Scotland in May 2003. Although the game ended in a 2-1 defeat, it is notable for the fact Northern Ireland scored through Steve Jones – the only goal scored by a ‘senior’ player during the infamous drought.

Usually a centre-back during his Irish League days with Crusaders and Coleraine (for whom he played in two Irish Cup Finals), McAuley became more familiar as a full-back, right or left, after moving to the Football League. A move across the water was first mooted when Sammy McIlroy offered him a trial at Stockport in June 2004, but it was Lincoln that claimed his signature for an undisclosed fee that August.

He quickly started making waves in League Two attracting interest from some larger clubs on the way to helping Lincoln to successive Play-Off qualifications in 2005 and 2006. He was awarded his first Full international cap for a depleted Northern Ireland side in the gala friendly against Germany to celebrate the Irish FA’s 125th Anniversary in June 2005. The following March he started his first international against Estonia at a snowy Windsor Park.

McAuley took his cap tally to five during the 2006 summer tour of the USA, making him Lincoln’s most capped player. On returning from the US, with his two-year deal at Sincil Bank expired, McAuley opted to make a Bosman free-transfer to Championship Leicester City. At the Walkers Stadium he played briefly under Nigel Worthington who was caretaker-manager at the tail-end of the 2006/07 season prior to his appointment as Northern Ireland manager.
.
Following Leicester's relegation to League One in 2008 McAuley opted to remain in the Championship, joining Ipswich Town for a fee believed to be around £1,000,000. He was immediately installed as first-team captain by Tractor Boys' manager, Jim Magilton.

McAuley scored his first international goal on his fourteenth appearance against San Marino in February 2009. He captained the team for the first time against Slovenia in March 2011.

In May 2011 McAuley rejected a new contract at Ipswich as he sought a club playing a higher level. He rejected an offer from Rangers in order to join English Premier League side, West Brom. As a sixteen-year-old he had turned down a move to Spurs to concentrate on his studies - at the age of 31 it had been a long journey back! The step up in class didn't phase McAuley at all as he was voted as West Brom's Players' Player of the Year and Supporters' Player of the Year in 2013.
....
Appointed to Northern Ireland's U17/U19 coaching staff in February 2021.

Pictures courtesy of Redneck Rich and Chopper1 from the OWC forum.