Biography:
Ian Stewart, who had won Northern Ireland schoolboy and youth caps, was signed by QPR in May 1980 on the recommendation of scout Bill Smyth. The move made up for his earlier disappointment having been turned down by Everton as a seventeen year-old. 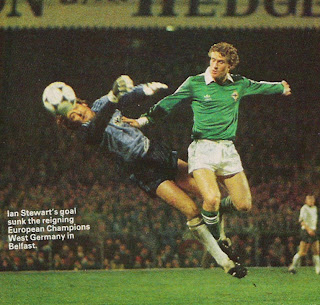 Stewart made his League début in a Division Two clash with Blackburn in October 1980 but over the next few seasons he failed to make an impact on the QPR first-team, despite his ability to play up front or on the wing. In fact, Stewart had made just three appearances for QPR at the time of his Northern Ireland début in the 1982 World Cup warm-up game with France. Although he failed to make the Finals squad Stewart was boosted by the experience and immediately after the World Cup he established himself as a regular in the Northern Ireland line-up, marking his third cap in November 1982 with the goal that clinched a 1-0 win over West Germany.

On the domestic front things still appeared grim, and in March 1983 he joined Millwall on loan. Finally, in the 1983/84 season, Stewart established himself in the QPR first-team, helping them to fifth position in their first season back in Division One. He maintained his place in the QPR side for the following season before being sold to Newcastle, who were looking to fill the gap left by Chris Waddle’s departure to Spurs, in August 1985. At St James’ Park Stewart again established himself as a regular in the match day squad, starting 25 games and coming of the bench three times during the 1985/86 campaign.

A regular in the Northern Ireland side right up to the 1986 World Cup Finals in Mexico, Stewart was surprisingly dropped from the starting line-up for the first two games against Algeria and Spain as Billy Bingham went for a more solid approach with Nigel Worthington at left-midfield. He did however start the final game against Brazil but after that his international career just petered out.

At Newcastle too the problems were setting in and after just nine starts during the 1986/87 season manager Iam McFaul released Stewart. A spell with Portsmouth was scuppered early on by a falling-out with manager Alan Ball, and he made just two first team appearances, both as substitute, in a year and a half. There followed a settled spell with Aldershot from January 1989. Indeed Stewart was at the Recreation Ground when the club folded during the 1991/92 season, the end of the ‘Shots’ League career and Stewart’s. Stewart played 11 games that season, scoring once, but these statistics were expunged from the records.

With the Shots gone, Stewart joined Colchester United for their run-in to the Vauxhall Conference title. Any hopes Stewart may have held over a return to the Football League where scuppered when he fell out with Us boss Roy McDonough when he refused to to travel on a three-day "bonding trip". Stewart then finished his playing days with Harrow Borough.

Ian Stewart was a particularly gifted footballer, with speed and skill, but he suffered from something that has afflicted many wingers, he had a tendency to disappear from games or just continuously run himself into corners. That, coupled with a very low goal-scoring rate for an attacking player, was perhaps what ruined his chances of making a prolonged impression in top-level football.

Throughout his career Stewart retained a great rapport with teammates and fans alike, his sense of humour legendary. Since retiring from playing he has worked with the Irish FA, coaching the with some success the girls‘ and women’s international teams and working as a grassroots development officer.

From his early days in teenage bands to the present day when he works to promote up-and-coming talent, Stewart has also retained a keen interest in the Northern Ireland music scene. 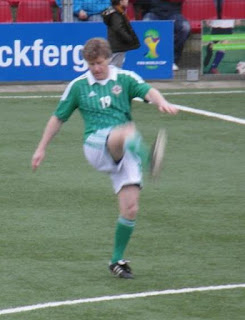