Biography:
Colin O'Neill emerged as a 16-year-old flying outside-right with Ards in 1980. Over the next eight years he had spells with Larne, Ballymena United and Portadown, developing into a battling midfielder, and picking up Inter-League honours along the way.

In September 1988 Motherwell boss Tommy McLean decided to take a chance on the, by now, chubby midfielder. After a few months in the reserves, getting into shape, O'Neill made his Scottish League bow against Hamilton Accies in November. He held on to his place for the rest of the season, adding steel to the 'Well midfield as they pulled clear of the relegation places. By this stage he had already earned a nickname from the Fir Park fans; they had lovingly christened him 'Psycho'. O'Neill's performances also clearly impressed Billy Bingham as he was called into the Northern Ireland squad for the end-of-season friendly with Chile, and he was to win his second cap early the following season in Dublin, against the Republic.

O'Neill developed further as a player during the 1989/90 season, continuing to live up to his nickname, but also beginning to spray the ball about with some poise as Motherwell put in an early title challenge before settling for mid-table security.

The 1990/91 season cemented Colin O'Neill's place in Motherwell folklore, but sadly also proved to be his last in Scottish football. In a Scottish Cup quarter-final replay penalty shoot-out with Morton, with the scores tied at 4-4, it fell to O'Neill to take the crucial kick. After dispatching his penalty with some aplomb he cartwheeled away in celebration.

This was nothing compared to the semi-final replay victory over Celtic, as O'Neill thundered home from 35 yards as Motherwell clinched a 4-2 win, and a place in the Final. A knee injury put his place in the final in some doubt, but, perhaps out of sentimentality, Tommy McClean included O'Neill in the 13 man squad, bringing him on for the last three minutes of a 4-3 victory over Dundee United.

Colin O'Neill was to spend much of the following season attempting to shake off that knee injury, but it was not to be, and he left Motherwell to become manager of Coleraine in July 1992. His spell with Coleraine proved to be brief, as he left the club after just 3 months. He made a brief playing comeback with Ards in 1997. Later he became a member of Ronnie McFall's coaching staff back at Portadown before spells as assistant-manager then director of football at Larne. In September 2013 he was appointed manager of Wellington Rec. 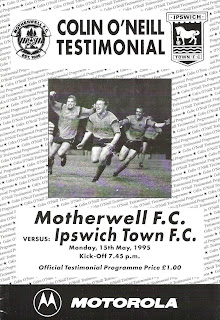 In his report on O'Neill's international debut against Chile, Malcolm Brodie noted:


O'Neill, much more mature in every respect now from his Portadown days, revealed real class; he was solid in his tackles, intelligent in his distribution and he fitted perfectly into the set up. He looks the natural successor to David McCreery and perhaps at last Bingham may have solved the midfield problem which has long plagued him since the retirement of Martin O'Neill and the premature axing of Sammy McIlroy.

... an extract which illustrates the loss Northern Ireland suffered when O'Neill's career was prematurely ended.