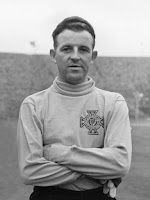 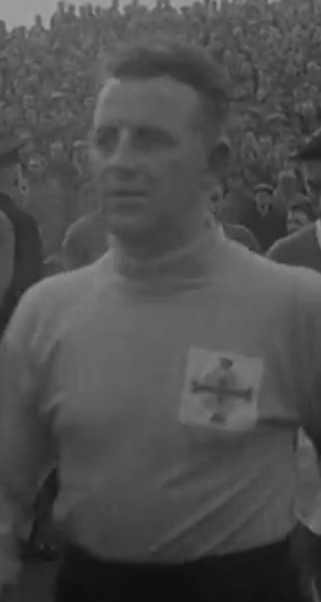 Born in the village of Moyraverty, situated between Lurgan and Portadown, Norman “Black Jake” Uprichard was bit by the footballing bug from a young age. He excelled at both soccer and Gaelic, his dual allegiances bringing the wrath of the GAA hierarchy as he received the mandatory life-time ban when his dalliances with the “planter” game were discovered. In his schooldays Uprichard was an outside-right, only going between the posts when his school team had no other option – he saved two penalties and from there, despite his relatively small stature, his "cat-like agility" meant that he never looked back.

At sixteen Uprichard signed with Glenavon Juniors. He then moved on to Distillery where his chances were limited by the presence of Billy Smyth, a ‘keeper who went on to earn four Irish caps. Still he'd done enough to earn admirers in England and in June 1948, aged just twenty, Uprichard signed for Arsenal in a £1,500 deal. He failed to make the breakthrough at Highbury and in November 1949 made a cut-price £750 move to Division Three South, Swindon Town. He made his Football League debut in a 2-1 defeat by Torquay on Christmas Eve 1949 and over the following few seasons established himself as one of the top custodians in the lower leagues.

Although he was playing in a struggling side, Uprichard earned his first five Ireland caps while with the Robins. It was his performance in a 1-1 draw with Scotland at Hampden that convinced Portsmouth that this was a player who could play in the top-flight and a £6,000 deal was quickly completed. His First Division debut was in a 2-1 win over Tottenham at home, though he was inauspiciously credited with Spurs’ consolation. The following week he faced Sheffield Wednesday at Hillsborough, picking up two broken knuckles during a 4-3 win. He was ruled out for six weeks, though ultimately a re-occurrence ruled him out for all but the first two games of the following campaign.

Uprichard made his return to first-team action on the opening day of the 1954/55 campaign, as Pompey faced Manchester United at Old Trafford. His performance in that day’s 3-1 win earned him special praise from Matt Busby who noted: “You would never have believed he had just returned from a serious injury. His fielding of the ball was clean and confident and it was a great comeback by a man who wouldn't give in.” That season Portsmouth mounted a serious challenge for the League title, ultimately finishing third, just four points behind champions Chelsea.

At international level Peter Doherty was beginning to make changes that were reflected in an upturn in results. By this time however Uprichard’s place was coming under pressure from a young pretender, Harry Gregg, and it was he who held the number one jersey through the majority of the 1958 World Cup qualifying campaign. However, come the all-important final match against Italy, Gregg was unavailable and in-stepped Uprichard. Although it was a goalkeeping fumble that allowed the Italians to score, the Irish recorded a memorable 2-1 win to book their place in Sweden.

Come the Finals Gregg was back, but circumstances once again threw Uprichard into the limelight. An ankle injury ruled the Manchester United-man out of the play-off match against Czechoslovakia, and Uprichard starred in a 2-1 win despite injuring his hand in a collision with Bertie Peacock. He was ruled out for the quarter-final clash with France, forcing a still hobbling Gregg to make a premature return – the 4-0 defeat seemed almost inevitable. After the Finals Uprichard made just two more appearances for Northern Ireland as the great team began to fade in stature.

At club level too things were changing. Eddie Lever, the manager who had signed Uprichard for Portsmouth, was sacked in April 1958. He was replaced by Freddie Cox, a man who Uprichard held largely responsible for Pompey’s struggles in the decades that followed. Uprichard, along with international colleagues Derek Dougan and Tommy Casey, found himself in the reserves as Portsmouth sat bottom of the First Division and were relegated after thirty-two years of top-flight football. One of his final appearances in a Portsmouth shirt came in a January 1959 in a reserve fixture against Nottingham Forest. After picking up an injured wrist he moved to outside-right for the first time since his schooldays and manged to score the winning goal!

Uprichard’s next destination was Southend United, where he played for just a season before drifting into non-league football. In footballing retirement he took to the licence trade in Sussex. In the 1970s he returned to Northern Ireland where worked in a bar at Queen's University, Belfast. He later retired to Hastings but remained a keen follower of football as well as becoming involved in angling, golf, darts and snooker.

Norman Uprichard passed away in January 2011 at the age of 82 only a short time after losing his wife of many years, Lily.

Anonymous said…
I worked with Norman Uprichard for a few years when I was a student at QUB and he was a barman at the University's staff common room. I have fond memories of Norman. Is he still alive?
Sunday, May 18, 2008

Anonymous said…
Norman was a very generous person and did enormous work for the local charities. With his football contacts he would often have a signed football or signed football shirts put up in the bar for a raffle.
Sunday, May 18, 2008

Anonymous said…
I met and went out with his daughter, Pauline, in 1975 when they lived in Belfast. We were about 19 or 20 at the time, I think she only went out with me as I had a Mini. We used to watch The Generation Game in the front room on an old black and white telly whilst Norman and his wife and mother were in the back room eating their tea. He didn't talk about football at all, I didn't even know who he was or who he had played for until much later on. Pauline also had a younger sister, but I forget her name. I was devastated when she left me, don't think I ever got over it. Does anyone know what happened to her? Thanks, Dave.
Thursday, June 05, 2008

Anonymous said…
hello dave my name is stephen roy,i am paulines son,my mum is very well and living in hastings where she has lived for the past 30years,my grandad norman and grandma lily also live there,im not sure how long ago u wrote this or wether your going to read this,but just thought id say hello and let u no,hope your well and will pass on the message tahat you were asking about her,thanks steve 21.2.09
Sunday, February 22, 2009

Anonymous said…
Hello, I work with Pauline Roy. She is the lovliest woman you could ever meet and still has the most horrendous laugh in the history of the world. 25/2/09
Wednesday, February 25, 2009

dave parke said…
Hi there Stephen and Jill. Thanks for the post. Nice to know that Pauline is ok and your grandparents are also well. I remember Lily as she used to make me sunday dinner and was a really lovely person. Jill used to drink lemonade all day, no tea or coffee. I sent the original message about a year ago as an article about Norman came up in our local paper (near Swindon). Tell Pauline I often think of her, although it was along time ago! Dave. 3/08/09
Wednesday, August 05, 2009

Anonymous said…
Hi Dave, My name is Honor, I am the friend of Pauline who works with her, she is not on the internet but she has asked me to tell you that if you can leave a contact number she would like to get in touch.
Tuesday, December 29, 2009

jcd said…
This comment has been removed by the author.
Tuesday, December 29, 2009

jcd said…
The only way this is going to work is to via email - I won't publish phone numbers on this site as you could be inviting all sorts of problems.

If everyone interested emails the site (jcd.nifg(at)gmail.com) I will try and make match-maker.
Tuesday, December 29, 2009

would love to chat

jcd said…
Dave, get in touch at the email address above and I'll put Pauline and you in touch.
Monday, January 04, 2010

Anonymous said…
Hi Dave
If you read this and want to contact Pauline plase use this email address:- foxylady19511@hotmail.com, as Pauline is not on the internet, but uses the above email for friends to contact via her friends email address.