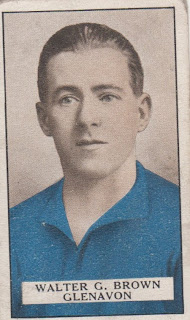 Biography:
A "brainy player" and "keen tackler" Walter Brown initially featured as an inside-forward, a position in which he played in Glenavon's 1-0 Irish Cup Final defeat by Glentoran in 1921. Brown would later earn international recognition at right-back. In three appearances for the Irish League he played at inside-right, left-back and right-back.

If you have any further details on Walter Brown, please let NIFG know.

Thanks to Rich for pointing me towards WG Brown's real name and to Red Warrior from the ILS Forum.

Rich said…
I had his name as Walter Brown, from contemporary newspaper reports. Are you sure William is correct?
Saturday, January 06, 2007

I will look into this further, but given your source, I would say you are a more reliable than Hayes!
Saturday, January 06, 2007

Rich said…
I've now checked on the Association of Football Statisticans website (where the information on international players is edited by Ron Hockings).