Biography:
A product of junior football, East-Belfastman Sammy Hatton made his name in senior circles with Ards, rising from the Seconds to establish himself during the 1960/61 season, earning the the clubs’ Player of the Year Award for his efforts. Within weeks of the honour he was on his way to Linfield.

At Linfield, Hatton had the unenviable task of replacing Tommy Hamill at centre-half. It didn’t take Hatton long to settle at Windsor Park, and he played a key role in Linfield’s 1961/62 “Clean-Sweep” campaign, playing a total of 52 matches as the League, Irish Cup, City Cup, Ulster Cup, Gold Cup, Co. Antrim Shield and North-South Cup were all won.

In October 1962 Northern Ireland were due to play Poland in Katowice when Terry Neill was forced to withdraw from the team. In need of a centre-half the call went out to Hatton, who had to dash to the Polish Embassy in London to obtain a visa on the morning of the team’s departure from Heathrow – he made the plane with ‘minutes to spare’. Northern Ireland claimed a 2-0 victory which set them well on the way to a European Nations Cup second round place. A month later Hatton won his second cap, again as stand-in for Neill. This time the result was not quite so impressive, as Scotland won the Home Nations match 5-1 in Glasgow. That proved to be his final cap, though he had already play twice for the Northern Ireland Amateur team and in 1969 represented the Irish League against the League of Ireland.

An extremely consistent performer with Linfield for close to a decade, Hatton overcame the disappointment of scoring the own goal which set Linfield on the way to an 8-1 defeat at the hands of arch-rivals Glentoran in April 1964, to captain the club to many successes, twice being named club Personality of the Year and in 1968 Ulster Footballer of the Year. One of his final feats as a Linfield player was to lead the team to a 2-1 Irish Cup Final victory over Ballymena, before he was released in a mass clear-out in May 1970.

Hatton actually stayed on at Linfield, taking over as coach of Linfield Rangers (third team), and from June 1972 to January 1973 he coached the firstteam before being relieved of his duties. Away from football Hatton worked for Harland & Wolff and also played golf and bowls. He died in March 1995 after being ill for several months. 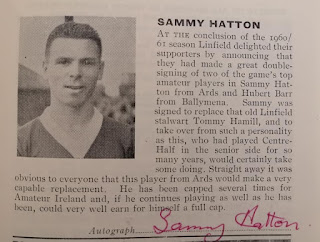