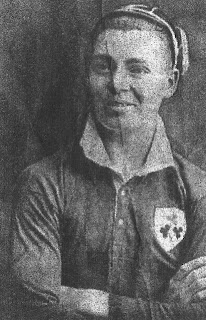 Biography:
Sam Jones broke into the Distillery team during the 1930/31 season, making his debut on 25th October. Playing largely at centre-half he won a Charities Cup winner's medal during his first senior season. A regular for the Whites for three years, he added runners-up medals in the Charities Cup and Irish Cup to his collection in 1933.

Capped for the first time by Ireland in October 1933, he played at left-half in a 3-0 defeat by England. Within days he was transferred to Blackpool, who's Irish scouting network also spotted Peter Doherty at the same time. Jones won his second, and final, cap against Wales in November 1933 - he scored in a 1-1 draw. In both his international appearances, Sam was joined by his brother, Jack, in the half-back line. Against Wales they were joined by brother-in-law, Billy Mitchell.

Jones would play for Ireland again, just not in official internationals. During the Second World War he played in an 8-4 defeat by the Combined Services and in the first post-War Victory International, a 1-0 defeat by England.

Jones' Blackpool career spanned thirteen years, but largely due to the War, just 165 League appearances. He had joined the club shortly after they had been relegated to the Second Division, and helped them to promotion back to the top-flight in 1937. He made his final appearances for the Tangerines in the transitional post-War 1945/46 season, but come the resumption of the Football League proper he was just shy of his 35th birthday, and had left full-time football behind to join the Blackpool coaching staff.