Biography:
Like many others before and since, Hugh Kelly came to football quite late. He had been playing Gaelic Football with Lurgan-based Clan na Gael while working in the family drapery firm, when invited to play for Glenavon after manager Andy Wylie had been impressed with his ball-handling skills.

Established in the Glenavon first eleven from early in 1937 he was soon recognised as one of the best ‘keepers in the Irish League when selected for an Inter-League match against the Scots in September 1938. In 1940 he helped Glenavon to the Irish Cup Final, keeping clean sheets in matches against Belfast Celtic IIs and Linfield, before losing 2-0 to Ballymena United in the Final. In January 1941 Glenavon suffered a nightmare defeat at the hands of Belfast Celtic, losing 13-0 with Celtic’s Peter O’Connor scoring eleven – an individual British Isles record.

Despite the embarrassing result, Elisha Scott stepped in to claim Kelly’s signature in the summer of 1941 as replacement for Tommy Breen. At Paradise Kelly claimed two Irish Cup winner’s medals in victories over Glentoran and Linfield. He may have claimed more honours had a contractual dispute not left him side-lined for some time. Never afraid to stand-up to authority, when he was reprimanded by Scott with the words, “My grandmother could have played better out there” Kelly adjusted the following week’s teamsheet, putting a line through his own name and replacing it with “Lish’s granny”. 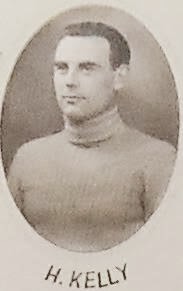 Transferred to Fulham in March 1949 as Belfast Celtic began to cash-in on their players before leaving the Irish League. He became noted as one of the heaviest ‘keepers in the Football League, weighing in at up to 14 stone. At Craven Cottage he displaced Ireland international Ted Hinton between the posts, and was capped himself for the first time in November 1949. That game was against England, and followed on quickly from an 8-2 defeat by Scotland that had seen Pat Kelly dropped from the number one shirt. Hugh fared even worse than his namesake, conceding nine! Unlike Pat, Hugh was given further chances by the Irish selectors, taking his cap total to four.

In August 1950 Kelly moved down to Division Two to play with Southampton. He played a season as the Saint’s regular ‘keeper, and then spent a season on the sidelines before again dropping down to Division Three (South) with Exeter City in June 1952.

Anonymous said…
Hugh always boasted he never picked the ball out off the net during his time playing for Celtic. I called at his shop in Lurgan, long after his retirement and challenged him on the matter.
He repeated it was a fact, Billy McMillan, Matty Cullen or Bud Aherne was designated the task !
Friday, April 18, 2008

Anonymous said…
Hugh Kelly was my wife's Uncle, WAS THE BROTHER OF MY MOTHER-INLAW. I REMEMBER HIM SO WELL, WHEN I VISITED HIM AND HIS SISTER NORAH, AND FAMILY, WE USED TO GO OUT TO THE PUBS AND HAVE A FEW DRINKS IN LURGAN, FUNNY THOUGH AS WELL AS I HAD THE PLEASURE OF BEING HIS BUDDY, HE NEVER TALKED ABOUT FOOTBALL TO ME OR ANYTHING ABOUT HIS GAMES, WHERE EVER WE WENT TOGETHER, IT SEEMED EVERYONE IN NORTHERN IRELAND KNEW HIM, I WAS SHOCKED TO HEAR OF HIM PASSING AWAY IN 1977, AND TO THIS DAY, STILL MISS HIS FRIENDSHIP.....
RALPH A. WOODBURY
TUNBRIDGE WELLS
Sunday, October 19, 2008

james kelly said…
Hugh Kelly was my father's uncle - I don't think I ever met him (I was a young boy when he died), but on behalf of my family I would like to thank whoever is responsible for posting this information - without the likes of this website, the details of Hugh's life might easily be forgotten. Fair play to you!
Monday, February 01, 2010