Biography:
As a boy Vic Hunter excelled at tennis, but it was as a footballer that he earned the greatest fame. After starting his career with Derry City, where he made his senior debut against Glentoran, Hunter signed for Coleraine in 1956 has remained at the Showgrounds for much of the intervening fifty years.

Hunter's Coleraine debut came against his former club in January 1957, and over the next thirteen years he made 473 first team appearances, playing his last game in January 1970. In the 1959/60 season he picked up the tag "Penalty King" for a remarkable run of penalties saved - of 17 conceded by Coleraine, only four were scored!

During his first full season in the Coleraine first team Hunter picked up a Gold Cup winner's medal, but the following season he fractured his leg in an Irish Cup tie at Ballymena. After battling back to fitness he suffered another setback, a fractured wrist. Again Hunter returned to action and he won a number of medals, including an Irish Cup in 1965. Also featured in that Cup winning side was Victor's brother, and future international, Allan.

Despite helping Coleraine to second place on three occasions during the '60s, an Irish League championship medal eluded Hunter. However, his career peaked with two Northern Ireland caps, versus England at Wembley in 1961 (1-1) and against Spain at Windsor Park in 1963 (0-1), to add to his Inter-League and Amateur International honours.

When his playing career ended due to injury, Hunter stayed at Coleraine as trainer and later became assistant manager to Bertie Peacock. In 1973 he moved to Newcastle in a business venture, during which time he coached Newcastle United's third team. After a few years away he returned to the Showgrounds, and in 1978 he was appointed manager, a position he held for three years.

In the mid-eighties Hunter became involved in Coleraine's Youth set-up, with future internationals Michael O'Neill and Barry Hunter (his son) emerging from his team. Hunter acted as assistant-manager and Reserve Team manager. He coached with Linfield from 1993-1997 taking charge of the goalkeepers and the Swifts before a spell with Ballymoney United. He then returned to the Coleraine Showgrounds coaching staff through to 2011.
In 2017 Hunter was appointed Honoury Life Vice-President by Coleraine. He was widely mourned when he passed away in 2021.
Irish FA Obituary 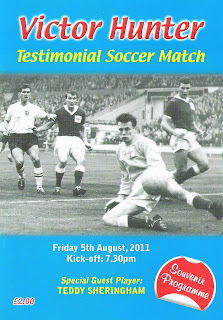