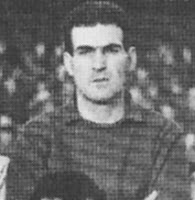 Biography:
Ted Hinton emerged in the Glentoran first eleven as a teenager during the earliest days of the Second World War. He was in-and-out of the team for a few seasons, winning his only senior medal in May 1941 when Distillery were defeated 1-0 in the Co. Antrim Shield final – Glentoran were forced to don Crusaders’ red and black striped shirts and borrowed boots, as all the Glens’ kit had been destroyed when the Oval was bombed days earlier. The following year Hinton played in an Irish Cup final defeat, 3-1 to Linfield at Celtic Park.

Still far from a regular choice for the Glens, Hinton transferred to Distillery in March 1943. The general upheaval of the War, plus the emergence of future international ‘keeper Billy Smyth, limited Hinton’s impact at Distillery. He impressed while guesting for Swindon Town in the post-War transitional season before signing for Fulham in August 1946. He was to be the Cottagers’ regular number one in the immediate post-War seasons, the club settling in mid-table of Division Two.

Hinton also became Ireland’s regular choice at goalkeeper after Linfield’s Alex Russell was tried in the first international after the War – and conceded seven. Hinton’s form between the posts was much more respectable, the Irish avoiding defeat in his first four outings, his performance in a 1947 2-0 win over Scotland earning particular praise.

1948/49 brought Fulham long-awaited promotion to the English top-flight, but Hinton had lost his place after just ten games of the Division Two Championship season, and he made his final appearance for the club in a 2-1 defeat by Cardiff in September 1948, his prospects further limited by the signing of another Irish ‘keeper, Hugh Kelly, in March 1949.
In July 1949 Hinton moved across London, dropping down to Division Three (South), to sign with Millwall in a £1,500 deal. After a disastrous first season at the Den when the team finished bottom of the League and were forced to apply for re-election, form picked-up and they challenged for promotion in the next two campaigns. Hinton also returned to the thoughts of the Irish FA selection committee and won his final two caps, coming into the team for Kelly, in a defeat to Wales and a draw with France in 1951.

Hinton, who had taken to storing his false teeth at the back of his net for safe-keeping, returned to Ireland after a falling out with Millwall's manager. He played out his career in the Irish League with Ballymena and Bangor.