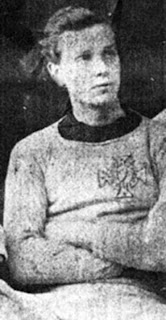 Biography:
From one of Ireland's earliest footballing families, Shaw Gillespie followed in the footsteps of his cousin, Robert Hunter, into the Irish team, and would later be followed by his younger brother John.

Playing for the unfashionable Lisburn-based Hertford FC, Gillespie became the youngest goalkeeper to be capped in nineteenth century international football, aged just 18 years and 35 days. A little over a year later he became Ireland's youngest ever captain at 19 years and 48 days (a record taken by Olphie Stanfield the following year) in his final international match, and notably the only time he finished on a winning side for Ireland.

Gillespie later moved to North America, where he became a professor, working in the US and in Naramata, British Columbia, Canada.

* Possibly Josiah Shaw Gillespie, appointed as a notary public in British Columbia in 1911.