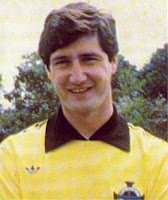 Long-term understudy to Pat Jennings, when given the chance in the Northern Ireland Number One jersey, Jim Platt was involved in some famous victories...

Biography:
As a schoolboy Jim Platt was a decent outfield player, but by his late teens he had emerged as an outstanding goalkeeper. At 17 he earned the first of two amateur caps and a three-week trial at Liverpool, though the Anfield-side preferred to go with a young Ray Clemence. At 18 Platt played for Ballymena in the Irish Cup final and made a £7,000 move to Middlesbrough. Boro had been alerted to the talented yougnster by Ballymena's manager, and ex-Boro player, Alex McCrae.

On his move to Ayresome Park, Platt spent some time in the reserves, and in one match against Lincoln he played upfront and bagged a hat-trick! He made his first-team debut in October 1971 in a 1-0 win over Blackpool and retained his place for 112 consecutive games through to April 1974. Ballymena reaped early benefits of this run, his tenth appearance had triggered an additional £3,000 payment as part of the transfer terms. In the 1973/74 season Boro claimed the Second Division title and Platt conceded just 28 goals in his 40 appearances. Already he was well on the way to setting the record for career clean sheets by a Middlesbrough keeper. In 1975 he helped Boro to a rare trophy win, claiming the Anglo-Scottish Cup after a two-legged final win against Fulham.

Platt enjoyed an up and down relationship with his Boro manager, Jack Charlton. One moment the World Cup winner would be hailing Platt as better than Pat Jennings and bemoaning his lack of caps, the next he was dropping Platt over a public row over where best for a keeper to stand at a corner kick! After missing much of the 1976/77 season over that little tiff, Platt was restored by new Boro manager John Neal. Neal too had his run-ins with Platt and when Scottish international Jim Stewart was signed in 1978, Platt found himself banished on loan to Hartlepool and Cardiff. He almost joined Blackburn before being recalled to the Boro side to replace the struggling Stewart. He quickly re-established himself as the consistent and commanding keeper of old. 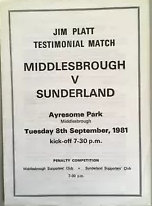 By the early 1980s Platt was Middlesbrough's captain and in September 1981 he was awarded a testimonial - he played the second half of the match against Sunderland outfield and, in typical fashion, he found the back of the net! The other notable feature of this match was the appearance of George Best, which led to, unrequited, rumours that he would be signing on permanently at Ayresome Park. Boro were relegated at the end of the 1981/82 season, though Platt was praised for his agile shot-stopping throughout a difficult season. The appointment of the flambouyant Malcolm Allison shortly after relegation saw Platt once again displaced, signalling the end of a Boro career that sees him still standing in fifth place in the club's all-time appearance list. Although just 31, still young for a goalkeeper, Platt decided to return to Ballymena as player-manager rather than continue is playing career in England.

It has been speculated that if not for Pat Jennings, Platt could have claimed 100 caps for himself. Indeed, like Willie McFaul before him it is unusual for a player featuring at the highest levels in English football to have been capped so few times. Still, Platt was thrust into the international lime-light on a number of occasions. In 1980, with Jenning's serving Arsenal in the FA Cup and Cup Winners' Cup finals, Platt played in every match as Northern Ireland claimed their first British Championship in 66 years. He managed seven consecutive appearances through the Irish FA's Centenary Tour to Australia and a World Cup qualifier against Sweden before Jennings was re-instated.

In the build-up to the 1982 World Cup there were doubts over Jennings' fitness and it looked like Platt might be the starting keeper in Spain. Jennings however recovered sufficiently to start the tournament between the posts and a frustrated Platt had a public falling out with Billy Bingham. For the key match against the hosts Platt was not even in the match-day squad as George Dunlop was chosen as Jennings' back-up. Northern Ireland progressed as Group E winners, but with Jennings unable to play in the second round match against Austria, Bingham and Platt reconciled and he started in a 2-2 draw.

Jennings was back in the starting line-up for Northern Ireland's defeat by France that brought their World Cup adventure to an end, but by the first international match of the following campaign he was out of favour at Arsenal and Bingham took the brave decision to start Platt against Austria. Although that match resulted in a disappointing 2-0 defeat, Platt was still the man in possession when West Germany visited Belfast and left with their tails between their legs - Platt's goalkeeping contributing as much as Ian Stewart's goal to a famous 1-0 win. By the end of the 1982/83 season, with Platt's Middlesbrough career in the wane and Jennings back to his best with Arsenal, the goalkeepers were restored to their traditional roles.

Back in Irish League football, Platt led Ballymena to the 1984 Irish Cup and he remained a regular in the Northern Ireland squad, playing twice as the British Championship was claimed again. He left Ballymena after just a year to become manager at Coleraine where he had played as a youth and following in the footsteps of his father Howard and brothers John and Davy. Platt won his 23rd and final cap as a substitute in a 1986 World Cup warm-up match against Morocco. After the finals in Mexico, with Jennings retired, Platt may have hoped to at last be first choice. While Bingham retained Platt in the squad for another season, the younger Phil Hughes and George Dunlop were preferred for the starting role. Platt's final international involvement was as temporary Northern Ireland manager as Bingham was unable to attend an international match in Israel.

Since resigning as Coleraine boss in 1990 after a poor run of form, Platt has served as a manager or coach with Ballyclare Comrades, Assyryska. the Irish FA, Darlington (leading them to the Division Three Play-Off final), Gateshead and Middlesbrough. He has also run a printing business, soccer schools and served as secretary of the Middlesbrough Former Players Association. 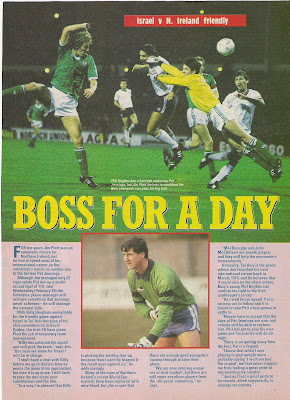 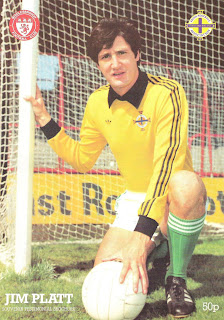 With thanks to Neil Coleman - The Official Hostory of Ballymena United FC
http://www.ballymenaunitedfc.com/.