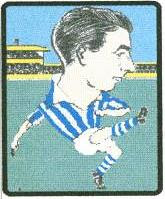 
Biography:
Born in Gilford, near Banbridge, Charlie Gallogly was a late starter at football when he presented himself to Belfast Celtic. Celtic were not adverse to signing young players for a reasonable fee with a view to selling them on for a healthy profit. They signed Gallogly until June 1946, however he did not make a firstteam appearance.

Gallogly moved on to Shelbourne at the start of 1945/46 season. He played a few times for the Shels senior team in early season competitions before moving to Waterford where he completed the season and scored the only two goals of his entire career. Waterford gained a commendable third place in the league that year.

On the 15th April 1946 Gallogly returned to Northern Ireland and signed for Glenavon Reserves, the first team having left senior football for the duration of the Second World War. Shortly afterwards he went to the USA where he played for Brooklyn Hispano, and played in an unofficial international for the US in a 3-2 win over Israel on the 17th October 1948.

Gallogly returned to Ireland and signed for Glenavon on the 6th January 1949. He made 8 appearances for them before being signed by Huddersfield Town in December 1949. Already thirty years-old when he moved to England, he may have posed as a 24 year-old, hence some sources record his year of birth as 1924. He spent two-and-a-half seasons, all in the First Division, as The Terriers regular right-back.

In the autumn of 1950 Gallogly was called into the Ireland side for the Home Nations matches against England and Scotland. He had a torrid time in the face of some of the most outstanding forwards of the day, and he finished on the end of heavy defeats in both matches. Indeed, he was held responsible for the Scots' opener in a 6-1 reverse at Hampden.Gallogly dropped down to Division Three (South) with Watford in 1952 and was briefly on the books of Bournemouth & Boscombe Athletic before his League career drew to a close. He returned to Glenavon for 1955/56 season and made a commendable 26 appearances and gained the only winner’s medal of his career in the City Cup competition. In 1958 he emigrated to America where he took charge of Brooklyn Shamrocks from 1958-1961.