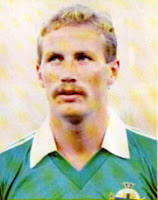 The creator of Northern Ireland's most famous ever goal, Billy Hamilton's work-rate and determination made him a legend wherever he played...

Biography:
Born in Gilnahirk, East Belfast, Billy Hamilton joined Linfield as a sixteen year-old, but had to bide his time before making the first-team breakthrough. He scored his first goals in the 1976/77 season, finishing with eight in all competitions, but the following season was to see him make a significant mark at Windsor Park.

After two disappointing campaigns, Roy Coyle’s side finally clicked, with Hamilton firing home seventeen goals on the way to Irish League, Irish Cup and Ulster Cup successes. His form was rewarded with a place in Northern Ireland’s first ever Under-21 side, who played out a 1-1 draw with the Republic of Ireland in March 1978. Recognising the talent of the young forward, QPR stepped in with a £25,000 bid directly after the Irish Cup Final win over Ballymena United. Within two weeks of signing at Loftus Road, and before he had even made a first-team outing, Hamilton was awarded his first Full cap, coming off the bench for Trevor Anderson in a 1-1 ‘home’ draw with Scotland (at this time ‘home’ for Scotland matches remained Hampden Park in Glasgow as the Scots continued to refuse to travel to Belfast due to the ‘Troubles’).

His first season in England proved a disaster for Hamilton; he played just eleven games, scoring twice, as QPR were relegated from the First Division. The following term, with a young Clive Allen scoring regularly, Hamilton played just once, and come November 1979 made a £38,000 move to struggling Burnley. Hamilton finished that campaign as the Clarets’ top scorer, tellingly with just seven goals, as the club were relegated to Division Three – Hamilton would play in Divisions One, Two and Three in consecutive seasons. The season's end brought a significant boost to Hamilton, as Billy Bingham included him in the Northern Ireland squad for that season’s British Championship. He marked his return to the green shirt with the winner against Scotland at Windsor Park (the Scots finally having ‘succumbed’ to the Irish FA’s invites) in a match which also earned him a concussion. His strong forward play in the remaining games of the Championship brought a 1-1 draw with England, a 1-0 win over Wales, and the title of British Champions to Belfast for the first time in 66 years.

Back in Division Three with Burnley, Hamilton began to find his feet with new strike-partner Steve Taylor, and while Hamilton’s total of nine goals wasn’t that impressive, he did lay on most of Taylor’s sixteen. The 1981/82 season saw Hamilton awarded the Burnley ‘Player of the Year’ title as he top-scored in the Third Division title winning side. 1982 also brought a place at the World Cup, Hamilton having played in all-but-one match of Northern Ireland’s successful qualification campaign, scoring a vital goal in a 1-1 draw with Scotland. In Spain Hamilton set-up Gerry Armstrong’s famous winner against the hosts, and found the net himself twice in a 2-2 second phase draw with Austria.

Having made the step back up to Division Two with Burnley, Hamilton continued to find the net regularly, finishing the 1982/83 with a seasons best (to that point) total of thirteen goals. The team as a whole however weren’t quite up to it, and once again finished in the relegation places. Un-phased, Hamilton topped his best total, striking eighteen times, but Burnley could muster only mid-table mediocrity. The summer of 1984 brought a £95,000 bid from ambitious Oxford United, freshly promoted from Division Three as Champions.

At the Manor Ground the brawny Hamilton formed a fantastic partnership with the whippet-like John Aldridge, and the pair fired Oxford to the Division Two Championship, and a place in Division One for the first time. A knee injury picked up in the FA Cup Fourth Round exit at the hands of Blackburn ruled Hamilton out for much of the title run-in, and limited his appearances in the top-flight the following term too. Perhaps an even more bitter pill to swallow was his absence from the Milk Cup Final defeat of his first English club, QPR.

Hamilton’s injury problems also cast a shadow over his international career, and he played just twice through the successful 1986 World Cup Qualifying campaign. It was only through much hard-work towards the end of the 1985/86 season that he was able to convince managers of both club and country that he was worthy of a place on the plane to Mexico. Bingham awarded Hamilton a starting role in the opening game against Algeria, only to drop him for the younger and fitter Colin Clarke for the remaining games. Like so many of that great team of the early-80s, Hamilton made his final Northern Ireland appearance in the 3-0 defeat by Brazil that brought that World Cup campaign, as well as an era, to a close.

That long-standing knee problem finally forced him to "retire" early in the 1986/87 season. He made his final League appearance in a 2-0 win over Coventry on 11th October 1986. After two months spent scouting for Oxford and working on local radio, he took the opportunity to manage League of Ireland club, Limerick City. Although his knee was no longer up to the rigours of full-time football, he did return to the playing field and in 1988/89 he finished with 21 goals as the League's top goalscorer. That season he also led Limerick to the Munster Senior Cup and an impressive third place finish in the League of Ireland Premier Division. Surprisingly Hamilton resigned early the following season.

Hamilton returned to management with Distillery in December 1989, and once again he returned to the playing field in the closing weeks of the 1989/90 season. In all he scored 33 times in 72 appearances for the Whites before the old knee injuries finally ended his career for good in February 1992. He continued as manager at New Grosvenor until February 1996, leading the club to the 1993/94 Gold Cup. A brief return to management with Glenavon in 1998 ended with Hamilton claiming to have stopped enjoying the role.

Since leaving the Glenavon hotseat, Hamilton has concentrated on his sports trophy business and latterly has work with the Footballing Task Force, helping to shape the future of the game in Northern Ireland. He briefly moved to Canada, selling his business to former international colleague, Alan McDonald. Since returning to the Province, Hamilton remains a regular face in the local football scene.

The Billy Hamilton Board Game! 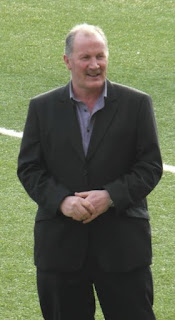 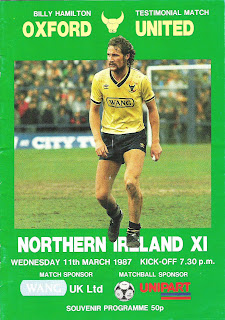 Anonymous said…
Never gave it less than 100% on the pitch. Nice guy off the pitch as well. Will always be remembered for that double goal salvo against Austria in 1982 World Cup.
Monday, July 05, 2021