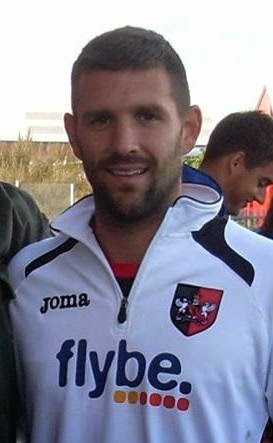 He came, he shone briefly, he decided he couldn't be bothered. Tommy Doherty seemed to have what it takes to become an all-time great, but a seemingly poor attitude left his career on a downward spiral...

Biography:
Tommy Doherty made big waves at Bristol City having emerged through the club's youth system. He was talked of as a future England star, but a series of injuries slowed his progress.


In 2002/03, seemingly free of injuries for the first time in his career, Doherty was called into the Northern Ireland B squad (he was eligible by virtue of his Derry-born grandfather) by Sammy McIlroy. He made an impression in a 2-1 defeat by Scotland Future so earning inclusion in the Full squad. In only his second full appearance he put in a Man of the Match performance in a 0-0 draw with Spain - he seemed the complete midfielder, combatitive and cool in posession, here was the man to turn around Northern Ireland's misfortunes.

It was not to be, and although he put in some good performances, Doherty just didn't seem the same player. After just nine caps he announced that he no longer wished to be selected for his adopted country as his heart really wasn't in it.

Doherty left his hometown behind in 2005 to sign with Championship side QPR. He never really seemed happy at Loftus Road and his time was marked by indiscipline and misfortune. After what actually amounted to three loan spells with Wycombe (during one of which he earned selection for the League Two PFA Team of the Season), Doherty signed a three-and-a-half year contract with the club on 3 January 2008.

In 2008/09 Doherty's "tigerish performances" earned him another place in the PFA League Two Team of the Season as well as two sendings off. A dispute with Wycombe manager Garry Waddock from their days together at QPR saw Doherty released in January 2010. He subsequently joined Hungarian side Ferencvaros for their training camp in Malta, signing a deal through to the end of the 2009/10 season.

Doherty joined Bradford City in the summer of 2010. He played his last game for the Bantams in December and left the club in May 2011 with the final year of his contract paid out early. A month later he joined Blue Square Bet Premier side, Newport County. He was released by Newport in January, and signed for Bath City early in the following month.

In 2012/13 Doherty returned to the Football League after signing for Exeter City. He left mid-way through the following season by mutual consent, with suggestions that he had become jaded by the physical demands of daily training.

Unknown said…
Was told by a disgusted Bristol City fan that he had lost his Player of the Year trophy in a card game. If true it certainly sums up to his attitude to football. Wasted talent for sure.