Scorer in a famous win over England, but not for (Northern) Ireland, Peter Farrell’s dual-international feats do throw up some footballing oddities…

Biography:
Peter Farrell began his senior footballing career with Shamrock Rovers, signing on his seventeenth birthday in August 1939. Through the Second World War he developed into one of the finest wing-halves in the League of Ireland, playing in three consecutive FAI Cup Finals from 1944-1946, winning the fist two.

Selected as captain of Eire on his debut, for their first post-War match, Farrell played left-half in a 3-1 defeat by Portugal in Lisbon in June 1946. That August, Farrell and Tommy Eglington, a colleague for both club and country, were signed by Everton in a joint £10,000 deal. The pair were to spend a decade together at Goodison Park, playing a combined total of nearly 900 games.

By the time Farrell was first selected by the IFA the following November, he had taken his FAI cap total to three, and had already faced England. His first four Home Nations games ended in two wins and two draws, as Ireland got off to a flying start in the resumed Championship. His greatest match in a green shirt was however for the Dublin-based side. Until 21st September 1949 England had never been defeated by a ‘foreign’ nation on home soil. Playing at inside-forward on his ‘home’ ground, Goodison Park, Farrell found the net late in the game to make the score 2-0 to Eire.

As Everton were relegated in 1951 Farrell was awarded the club captaincy. He eventually led them to promotion from Division Two, as runners-up, in 1954. The previous year had seen the team run Bolton Wanderers close in the FA Cup semi-final, losing 4-3 at Maine Road. Farrell made his last appearance for the Toffees against Bolton in the final game of the 1956/57 season. The following October he moved across the Mersey in a £2,500 deal, to become player-manager of Tranmere Rovers. At Prenton Park he once again teamed up with Tommy Eglington.

After a poor run of results in the first half of the season, Farrell left Tranmere in December 1959. He was briefly player-manager at Sligo Rovers before taking charge of Holyhead Town, and with the help of some experienced ex-Everton and Tranmere colleagues, led them to the Welsh League North title. He later returned to Ireland where he managed Drogheda United (1963-64) and St Patrick’s Athletic (1967-68). 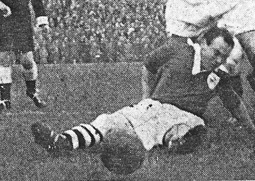