Biography:
Brought up in the Village area of Belfast, Joe Douglas made the obvious move of signing with boyhood heroes Linfield as a teenager. In Christmas Day 1939 he appeared for Linfield Swifts in a 2-0 Steel & Sons Cup Final win over Crusaders. Unable to make an impact at Windsor Park, he eventually turned up at Belfast Celtic where he developed into one of the best left-halves in the Irish League. 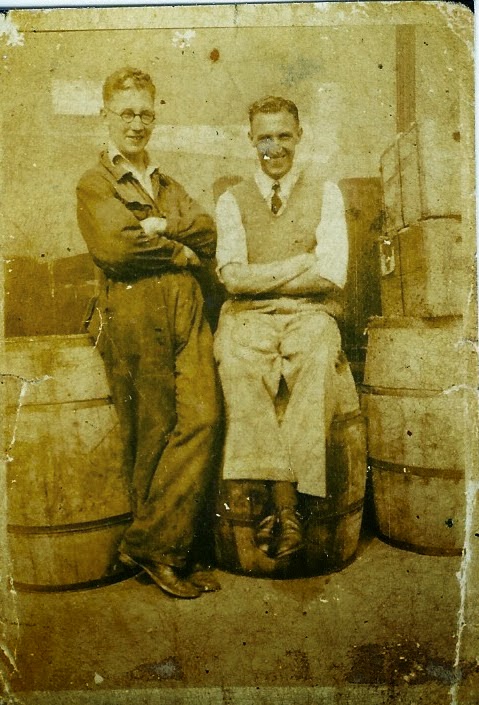 Starring in a Celtic half-back line which also included Jackie Vernon and Harry Walker, Douglas picked-up Irish League and Cup medals in a career that spanned the Second World War. Douglas was selected for Ireland's first post-war international match, a 7-2 defeat by England, but was never selected again.

Douglas remained with Belfast Celtic until the club left the Irish League in 1949, and he was a member of the squad that toured the USA that summer. Douglas joined Ballymena where he appeared in the 1951 Irish Cup Final defeat by Glentoran. The following season he played in a 3-0 defeat of Cliftonville in the Co. Antrim Shield Final replay.

Later, Douglas lived for a while in Burton-on-Trent where he worked in a brewery.

Thanks to Stephen McCormick for the Belfast Celtic picture and Ernie Dougan for the b&w picture (also featuring Ernie's uncle Ernest on the left). Additional details by George Glass.

Anonymous said…
hi could you please tell me who joe p douglas played for when belfast celtic withdrew from the irish league in 1949
Friday, January 16, 2009

Anonymous said…
hi i have a good picture of joe douglas, but dont know how to send it to you. i was the one who wrote to you asking who joe played for when he left celtic.regards stephen
Saturday, February 21, 2009

jcd said…
Thanks Stephen,
I would appreciate it if you could forward me the picture to jcd.nifg(at)gmail.com [replace the (at) with @].
Saturday, February 21, 2009

Unknown said…
Hey Guys, We are Joe's family in Canada. We would love to see pictures of Joe from the old days. We also have a great collection from his playing days. To answer the question, when Celtic disbanded he went to play for Ballymena.
Let us know if you need any more information
Cheers!
Saturday, March 30, 2013

Anonymous said…
hi I have a photo of Joe Douglas with my long lost uncle Ernie Dougan working somewhere in England .Joe lived around the corner from Ernie in Derg ST Belfast so they may have gone to England together
Tuesday, October 01, 2013

Anonymous said…
have a photo of joe douglas with my uncle ernie working together in england
Tuesday, October 01, 2013

jcd said…
Hi Ernest. Is there a year on the photo? I would appreciate a scan of the photo if you could. You can email at jcd.nifg@gmail.com
Wednesday, October 02, 2013

Joseph Timothy Douglas said…
I am Joe's grandson and was named for him. I would love any photos anyone would have. Please email to tim_douglas@hotmail.com.
Thank you for having this page!
Thursday, November 25, 2021