The goalscoring feats of Jimmy Dunne stand-out in English football’s history books, and his return of sixteen goals in 22 appearances for ‘both’ Irelands is equally impressive…

Biography:
Born in the Ringsend area of Dublin, Jimmy Dunne played Gaelic football in his teens. He was imprisoned for IRA activities and went on hunger strike. It was during this time behind bars that he took to "soccer", and on his release began playing junior football with a number of Dublin-based clubs, before joining Shamrock Rovers. He left Rovers in 1925 to sign with English Division Three (North) side New Brighton, and he managed to find the net six times in eight matches prompting First Division Sheffield United to buy him in February 1926.

Dunne’s initial progress at Bramall Lane was fairly slow, he made his debut in a 4-0 win over Arsenal in September 1926, and in his first three seasons he played in a total of just eleven League games. He scored his first goal against Derby County in October 1927, and someone from the Irish FA’s selection committee must have been keeping an eye on his progress as he won his first cap against Wales the following February.

It was not until the 1929/30 season that Dunne showed what he was really capable of at the highest level. He found the net 36 times in the League, a total that included two hattricks and two four goal hauls, as he finished as the League’s top goalscorer. That same season he also made the breakthrough into the Irish Free State’s team, scoring twice on his debut in a 3-1 win over Belgium in May 1930.

The following season Dunne’s goalscoring continued unabated, as he scored 41 League goals (50 in all competitions). He remains the only Irishman to have topped forty goals in a season in the Football League. He also found his way back into the Irish FA’s team, scoring in a 5-1 defeat by England in October 1930, and again the following March in a 3-2 defeat by Wales. This was the beginning of a run that saw four goals in four consecutive appearances - a feat matched just once before or since, by Willie Irvine in the mid-1960s. So inspirational was Dunne's form that he was awarded the Irish captaincy.

A highly versatile goalscorer, Dunne excelled at centre-forward or inside-forward, and was particularly adept with his head – indeed a hattrick against Portsmouth in September 1930 were all headers. 1931/32 saw Dunne top thirty goals for a third consecutive season, a feat matched only by Alan Shearer since. His best run of form brought twelve consecutive goalscoring appearances and saw a total of eighteen goals between October 1931 and January 1932. At this time Arsenal offered £10,000 for Dunne’s signature, but the bid was rebuffed as Dunne stayed on at Bramall Lane for another season and a half, scoring another 36 goals. Finally with the depression biting hard on Sheffield United’s finances, they were forced to sell their sat player for a reduced fee of £8,250 in September 1933.

A first season total of nine League goals helped Arsenal to clinch their second consecutive League title, as Sheffield United, undoubtedly missing their goalscoring talisman, suffered relegation. The signing of Ted Drake in the summer of 1934 effectively ended Dunne’s Arsenal career, and he played just once as Arsenal again retained their League title. Sheffield United sought to re-sign their lost hero in February 1935, but Arsenal refused to release him. After just eight outings and a single goal in 1935/36, Dunne was finally allowed to leave Highbury and he signed for Division Two Southampton.

Dunne stayed just one season at the Dell, finishing as top-scorer with fourteen goals. Despite the offer of a new contract, he left Southampton through the transfer “back-door” to the League of Ireland, returning to Shamrock Rovers as player-coach. His influence was immediate, Rovers claiming consecutive League titles and FAI cup and League Shields during Dunne’s final five seasons as a player.

It was also whilst with Rovers that Dunne brought his international career to a close, making his fifteenth and final FAI appearance against Germany in May 1939. His record of twelve goals for the Irish Free State/Eire side still stands out in the record books, and his return of four goals in seven IFA appearances also stands up to scrutiny.

Jimmy Dunne left Shamrock Rovers to become coach at Bohemians in 1942, before returning to Milltown in 1947. He died suddenly, aged just 44, in November 1949. 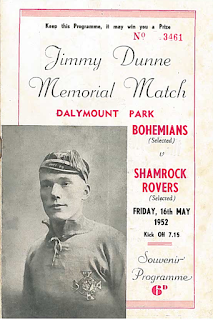