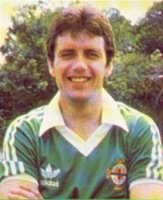 One of the many youngsters to be talked of as "the next George Best", Terry Cochrane inevitably failed to live up to the early hype, but did make a telling contribution to Northern Ireland's footballing history...

Biography:
Terry Cochrane started out as a youngster with Derry City and had been rejected after a months trial with Everton, then managed by Billy Bingham, for "not having the right build" to play in midfield. Cochrane returned to the Irish League to play for Linfield, and then Coleraine, thinking his dream of English football was over. At Coleraine, under the tutelage of former Northern Ireland boss Bertie Peacock, Cochrane developed into a fine "old-fashioned" winger and was capped for the first time in October 1975 against Norway.

In October 1976 Cochrane moved to Burnley, then playing in Division Two. With Burnley he became a much sought after player, his scintillating displays aiding Burnley in their survival from relegation, and Middlesbrough paid a club record fee of £233,333 for him in October 1978. This was also a record fee for a Northern Ireland player and he became an instant fans' favourite, setting up both goals on his debut in a 2-0 home win over Norwich City.

Quick and skillful, Cochrane enjoyed tormenting opponents, but his temperament was often called into question. He was scapegoated by successive Middlesbrough managers and twice submitted transfer requests after being dropped. When Malcolm Allison banished him to train with the youth-team it was clear the end of his Boro career was near. After five years at Ayresome Park and a brief spell playing in Hong Kong, Cochrane moved to Gillingham in October 1983.

Cochrane was never really an established member of the Northern Ireland team, indeed half of his 26 caps came as a substitute. He will however be remembered for his goal against England during the 1980 British Championships. The goal came nine minutes after he had come on as a sub, and just sixty seconds after the English had scored, to earn Northern Ireland a crucial 1-1 draw as they went on to win the Championships for the first time in 66 years.

A hamstring injury picked up in a warm-up match against France ruled Cochrane out of the 1982 World Cup squad after playing in all but two of the qualifiers. His most telling contribution in that campaign was against Portugal at Windsor Park, chasing down a ball that seemed certain to go out for a goal kick, stopping it on the by-line before crossing for Gerry Armstrong to score the only goal of the game.

Cochrane was capped just twice more after that World Cup series, acting as Martin O’Neill’s deputy in a British Championship game against Scotland in December 1983, as Northern Ireland won the trophy; and as substitute for Armstrong in a European Championship qualifier against Finland in May 1984. After failing to make the 1986 World Cup squad he spent that summer with Dallas, before short spells with Millwall (November 1986) and Hartlepool (January 1987). Later Cochrane moved into non-league football with Billingham Synthonia, coached the Saudi Arabian Military team, and had a spell a player-manager of the ill-fated South Bank.


Terry Cochrane settled in the Middlesbrough area, where became an active youth coach and radio pundit. In January 2008 he returned to Northern Ireland to take up an appointment as manager of Glenavon (story) though he left shortly after the end of that season (story). In August 2009 he began coaching Hartlepool Ladies.

Unknown said…
According to Irish Times, Billy Hamilton signed Cochrane for Limerick City in late October 1987. He played three LoI games for them, scoring once.