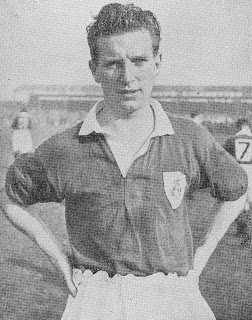 An FA Cup winner who was part of an All-Star Irish forward line which failed to deliver on their potential...

Biography:
Sammy Smyth made his name as a goalscorer with Linfield during the Second World War. On 23 December 1944 he bagged four of Linfield's goals in a 9-2 win over Glentoran! The Blues other scorers were Davy Cochrane (3), Sammy McCrory and Norman Lockhart, all of whom would play for Ireland. He was much sought after by clubs across the water, though as an amateur any move would have yielded no fee for the Blues. Smyth signed as a professional with Intermediate side Dundela in June 1947 and was quickly snapped up by Wolves, netting the Duns a healthy £1,250 fee.

Wolves were building a team that would become one of the dominant sides of the 1950s. An early success arrived in the shape of the 1949 FA Cup. Smyth scored six on their way to the final, including a semi-final winner against Manchester United. At Wembley he scored a fine goal, dribbling from the half-way line before smashing home to give Wolves a 3-1 victory over Leicester City.

It was only a few months, and eight League games, after arriving at Molineux that Smyth added senior international honours to the amateur caps he had won while at Linfield (he had also been a trialist for Ireland Schoolboys before the War). His debut, as stand-in for the injured Peter Doherty, saw him net both in each half of a 2-0 win over Scotland in front of 52,000 people at Windsor Park. After such a bright start to his Ireland career much was expected of Smyth at international level, but ultimately he was part of the team at a difficult time that yielded mostly disappointing results.

In 1951 Smyth made a big-money move to Stoke City and on the occasion of his ninth, and final cap, was the first Potters player to be capped by the Irish FA. Although Smyth managed a goal every other game while with Stoke, the club struggled towards the foot of the First Division table. He stayed just a season and a half at the Victoria Ground before joining another struggling First Division club, Liverpool. He actually made his Liverpool debut in a 3-1 defeat by Stoke in January 1952 and it was only a late-season run of form that saw the Reds climb out of the relegation places, with Stoke dropping into Division Two.

Liverpool weren't so fortunate the following season as Smyth's return of 13 goals in 26 games could not save them from the drop after nearly fifty years in the English top-flight. Smyth never took to the field in the Second Division, preferring to escape the football's minimum wage and look to his future. He married and settled back home where he worked as a bookmaker. He did however continue to take to the field as player-manager at Bangor.

Later, Smyth ran his own sports shop and worked as an agent for a sportswear company. He was also an active golfer and was captain and president of the Clandeboye Golf Club. In his eighties he left Northern Ireland behind to live with his daughter in the Cayman Islands where he passed away at the age of 91 after a battle with Alzheimer's.