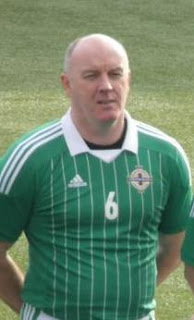 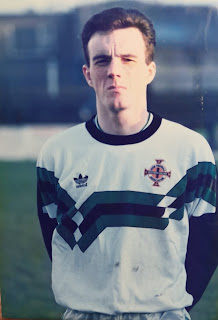 In 1990 John Devine seemed to have the footballing world at his feet, he was capped at Under-21, Under-23 and Full international level, he had played for the Irish League and won his second Irish Cup winner’s medal – and he was still just 21 years-old. What’s more it seemed inevitable that he would be making the trip to full-time football with either Southampton or Osasuna. As it was, the expected move never materialised, and Devine spent over a decade collecting a host of further Irish League honours with Glentoran.

Devine came through the Northern Irish junior football system, signing for Glentoran shortly after his sixteenth birthday in February 1985. He broke into the first-team mid-way through the 1987/88 and, injury permitting, wasn’t dislodged for nearly twelve years! His first season brought an Irish League and Cup ‘Double’ plus a Co. Antrim Chalice, and by the time he earned a call-up to the Northern Ireland Under-21 squad in the spring of 1990 he had added League Cup, Ulster Cup and Floodlit Cups to his collection. He starred in a 2-1 win over Israel, and a month later, further weighed down by another Irish Cup medal and a Co. Antrim Shield medal, he played and scored against the Republic of Ireland in an Under-23 international.

Billy Bingham had seen enough to include Devine in the following week’s friendly international match with World Cup finalists, Uruguay, and he came on as a second half substitute for Colin Hill in a 1-0 win. It was from here that Devine believed he was on the road to full-time footballing success. As mentioned though, the move across the water never materialised, and Devine began to suffer a dip in confidence and a catalogue of injuries which ensured any lingering hopes of a move were scuppered for good.

It took a while for Devine to recover from this massive disappointment, but when he did, he came back better than ever. Established as Glentoran’s captain in the mid-90s, he was a key member of Roy Coyle’s side that emerged as one of the Irish League’s dominant forces. A third Irish Cup winner’s medal in 1998 was followed up by perhaps the best season of Devine’s career, culminating in a League title, Gold Cup, Co. Antrim Shield and a player of the year double. Surprisingly he was allowed to leave the Oval at the end of that season, and the race for his signature was led by Portadown until Coleraine nipped in at the last moment.

Three seasons at Coleraine saw the Bannsiders challenge at the top end of the Irish League, but aside from runners-up medals in the Gold Cup and Coca-Cola Cup, the only winner’s medal to come Devine’s way was in the North-West Cup. A season with Glenavon in 2002/03 pre-empted a spell at Larne where he was to become player-manager from December 2003 through to the following summer, when he was sacked due to insufficient signings for the forthcoming campaign. Devine then finished his senior playing career with a brief spell back at Coleraine’s Showgrounds. 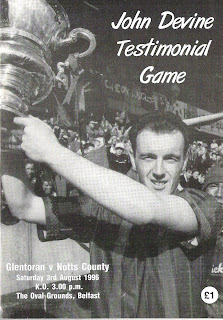