By jcd October 25, 2006
A creative midfield maestro, Jim Magilton's range of passing made him a popular member of the Fifty Caps Club... 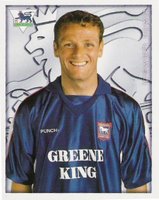 Jim Magilton was appointed as Ipswich Town manager for the 2006/07 season, though he remained registered as a player as emergency cover. Magilton was sacked as Ipswich manager on 22nd April 2009. He wasn't out of work long as on the 3rd June he was appointed as manager at QPR. In December he was suspended following an argument with a player and he left Loftus Road by "mutual consent" on 16th December. In July 2011 he joined Shamrock Rovers on a temporary deal as assistant-manager to Michael O'Neill. The pair competed for the Northern Ireland job, with O'Neill winning the appointment. Magilton then took the job of interim head-coach at Melbourne Victory from January to March 2012. In June 2013 he was appointed as the Irish FA's Elite Performance Director, with responsibilities including identifying players and coach development. He also took charge of the Northern Ireland Under-21 side, initially on a caretaker basis, but permanently from early in 2014 through to the end of 2016. In September 2014 he was appointed as assistant manager of the senior side on an interim basis following the departure of Billy McKinlay.
Magilton continued as the Irish FA's Elite Performance Director through to December 2020 when he left to become Sporting Director at Dundalk. In April 2021 he was appointed interim manager while the club sought a permanent appointment, but he left Oriel Park that November after a period of upheaval at the club.

Jim's brother Michael was also a gifted footballer, and represented Northern Ireland at youth level having also come through the youth ranks at Distillery and spent time on the books at Norwich City.