A prolific goalscorer throughout his playing career, Hugh Davey found it a little tougher on the international scene...

Biography:
From Shrigley, near Killyleagh, Hugh Davey played War-Time football with Belfast United before returning "home" to Killyleagh United who he helped to the Combination Third Division title. He really came to the fore playing up-front for Glentoran with Hugh Meek, their goals firing the team to the League and Cup double in 1921. Davey finished the season with eleven goals from twenty appearances, and also a Charities Cup runner-up medal.

Davey's return of 14 goals in 17 games during the 1921/22 season couldn't prevent Linfield completing a clean-sweep of all the trophies on offer - Glentoran finished as runners-up in the League and City Cup. He did however claim his first representative honour during the season, leading the line in the Irish League's 3-0 defeat by their Scottish counterparts in October.

A move to Blackburn Rovers brought little joy to Davey, who failed to break into the First Division side. He joined Division Three (South) new-boys Bournemouth and Boscombe Athletic for the 1923/24 season, a move which brought the attentions of the Inter League Board. Bournemouth were ordered to pay Glentoran £100 plus 50% of any future transfer fee. His goalscoring prowess for one of the division's whipping boys brought a move to Reading mid-way through the 1924/25 season in a player-exchange deal. Again the Inter League Board were asked by Glentoran to adjudicate and they were awarded the princely sum of £25.

The 1925/26 season proved to be Davey's best in the Football League, his total of 26 goals in 28 games firing Reading to the Division Three (South) title, and their first ever promotion - a hattrick in a 7-1 victory over Brentford on the final day of the season ensuring top-spot by a single point.

The Irish selectors couldn't ignore Davey's feats infront of goal any longer, and awarded him his first cap in a 0-0 draw with England in October 1925. A year later he marked his second cap with a goal in a 3-3 draw against the English at Anfield, and a year after that he led the line in a 2-0 victory over England at Windsor Park - it was a remarkable run of results for the Irish to avoid defeat by England three years in a row!

In Division Two with Reading Davey's remarkable strike-rate continued, and with twelve goals in ten games at the start of the 1927/28 season he was signed by First Division Portsmouth. Portsmouth were struggling, and Davey scored twice in seven matches as they maintained their top-flight status by just a point. While with Pompey Davey won his fifth and final cap against Wales in February 1928. Although a return of just one goal in five appearances was below par, he could look back on satisfactory run of results in international football.

Having failed to make the expected impact at Portsmouth, Hugh Davey returned to the Irish League with Belfast Celtic in 1928 before being forced to quit following a knee operation.

For many years Davey had a successful pub and grocery story in Omeath, just yards from the Border on the Newry-Omeath road. In the 1980s a burglary saw his medals stolen, but one of his international jerseys remains on display inside the Maghera Inn. Three of his sons had successful football careers in the League of Ireland and the Irish League, Con, Pat and Terry, and his grandson, also Hugh, won Under-21 caps. 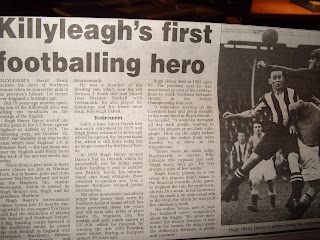 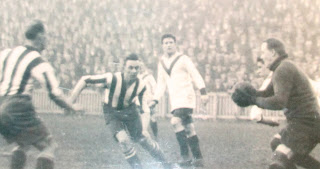 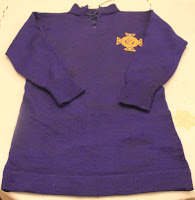 With thanks to Martin O'Connor, Roy Cathcart and Peter Davey

Taken prior to Home Nations match against Scotland at Windsor Park in February 1927. Davey was captain in a 2-0 defeat.
Sunday, September 23, 2007