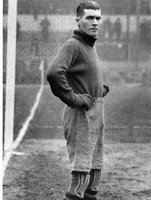 Lithe and cat-like, possessor of superb judgement and a master of the goal area, Elisha Scott was the longest-serving player in Liverpool’s history and regarded as the finest ‘keeper of his age, and a contender for the title of “All-Time Best”…

Biography:
Elisha Scott followed in the footsteps of his elder brother, Irish international goalkeeper Billy. “Lish” played with Linfield Swifts and intermediate side, Broadway United as a teenager. On 11th May 1912 he guested for Linfield against Blackburn Rovers in a Titanic Memorial match with a view to signing a permanent deal. Instead he travelled to England where, on Billy’s recommendation, he had a trial with Everton. Elisha was rejected by the Goodison-club as too small and too young and he signed instead for Liverpool – another opportunity engineered by Billy.

Liverpool’s first-choice ‘keeper in the years immediately preceding the First World War was Kenneth Campbell, thus Scott's early chances were limited. He made his debut against Newcastle United on New Years Day 1913, keeping a clean-sheet in a 0-0 draw. So impressive was his performance that Newcastle immediately made a £1,000 bid for Scott’s signature. Although Scott was tempted by the lure of firstteam football, the bid was rejected by Liverpool secretary/manager Tom Watson who rightly reassured the teenager that he had a bright future at Anfield. Scott gained his first run in the firstteam for the final 23 First Division fixtures of the 1914/15 season when he displaced Campbell.

During First World War Scott returned to Belfast. He played part of the 1915/16 season for Belfast United, a newly formed team who competed in all cup competition until 1920/21 before disbanding. They had no home ground and played all their matches away. On 11th March 1916 Scott joined Linfield as cover for the injured Irish international Fred McKee. He made eight appearances including in the 1-0 Charity Cup Final defeat by Distillery on 29th April 1916 – his first medal, albeit a loser’s one!

For the 1916/17 season Scott, perhaps recognising his chances with Linfield would be limited by the return to fitness of Fred McKee, joined Belfast Celtic as an amateur. Celtic, the only Irish League club to become a Limited Company, declined to join the Belfast & District League which had been formed in 1915 after the Irish League was suspended for the duration of the War. The club’s shareholders were unwilling to pay the players’ wages for this “unofficial” competition and instead they competed as amateurs in the Intermediate League under the name of Belfast Celtic II. The team continued to play, under the name of Belfast Celtic, in the Irish Cup, Co. Antrim Shield and Charity Cup. Celtic’s League place was taken by the aforementioned Belfast United who recruited several of their players who were unwilling to forego their wages.

With Belfast Celtic, Scott claimed four hard-earned medals. In April 1918 he was an Irish Cup winner following two 0-0 draws and a 2-0 win over Linfield in the Final. In 1918/19, Celtic having returned to professionalism and senior football, he claimed an Irish League winner’s medal following a 1-0 play-off win over Linfield. That same season the Charity Cup was shared with Glentoran following a 1-1 draw in the deciding play-off and in the Co. Antrim Shield he lost out in the Final to Distillery who won the replay 1-0 after a 0-0 draw in the first game.

After the War ended Scott returned to Liverpool determined to cement his place between the posts. He made the position his own following Campbell’s departure for Partick Thistle in April 1920. Scott was a major part of Liverpool’s back-to-back championship wins of 1922 and 1923, missing just three games in the first title winning season and none in the second. He remained an almost permanent fixture in the side through to the late-1920s when his position came under threat from Arthur Riley. Still Scott battled for his shirt and in 1931/32 he missed just a single match but thereafter his chances declined.

Scott’s name remains exalted in Liverpool folklore, particularly in relation to his rivalry with legendary Everton centre-forward, Dixie Dean. The most famous story, perhaps a myth, relates to how the two players encountered each other in Liverpool city centre. Dean, famed for his heading ability, touched his hat and nodded as the two men passed and Scott pretended to dive as if to save an imaginary header!

Although the beginning of Scott’s international career was no doubt delayed by the First World War, he did go on to claim a then record 31 caps. He had made his international debut against Scotland in March 1920, a match in which Liverpool teammate Campbell played as ‘keeper for the Scots. Highlights during Scott’s international career were few-and-far-between; indeed it was his eighth cap before he tasted victory. There was a home win over England in October 1927 and three victories over Scotland, including in 1933 when he saved a "blistering penalty kick" from Glasgow Celtic's Peter McGonagle, but these were times when the Irish were happy to avoid a hammering and with talismanic Scott in goal these were mercifully rare. His international career came to a close at the age of 42 years and 200 days, almost two years after he had left Liverpool.

Scott’s departure from Liverpool arrived in 1934 when he accepted the role of player-manager of Belfast Celtic. Shortly beforehand the unthinkable had almost happened when Liverpool, having placed the veteran-Scott on the transfer list, received an offer of their £250 valuation from Everton, but fans’ protests meant that the Toffees were unable to make amends for their two decade-old misjudgement. Scott played his 468th and final game for Liverpool at Chelsea on 21st February 1934 – a club record that would last for 23 years. Such was the aura surrounding Scott that the Liverpool board took the unusual step of allowing him to address the home crowd from the directors box prior to the final home match of the season. He departed from Anfield on 2nd May 1934, leaving behind an army of admirers and a host of wonderful memories.

On 26th June 1934 Scott was officially unveiled as player-manager of Belfast Celtic. He shared goalkeeping duties with Tom Breen until the end of the 1935/36 season when he retired to continue as manager only. Under his stewardship Celtic enjoyed their most successful period, claiming ten Irish League title, six Irish Cups, five Gold Cups, five Co. Antrim Shields, three City Cups and three Charity Cups.

Scott’s management style was extremely strict. He demanded that his players undertook stamina training to maintain a high level of fitness through to the very end of a game, thus many victories were claimed as less disciplined opponents began to tire in the closing minutes. He often deployed his wife, Alice, and sisters, Edith, Elizabeth and Annie, on a tour of the local hostelries to find players failing to adhere to his strict "no drinking on the eve of a game" rule. He was also blessed with a very strong squad composed of dedicated and exceptionally gifted players. In Harry Walker and Bertie Fulton he had two players who were brilliant tacticians, able to lead and change tactics as circumstances demanded.

Belfast Celtic withdrew from the Irish League on 23rd April 1949 following several sectarian incidents – most notably the attack on Jimmy Jones by Linfield fans at Windsor Park on 27th December 1948 – as they felt that their players and supporters could not be adequately protected by the police. As the squad was sold off in those final months one figure remained – Elisha Scott. He was appointed as Caretaker/Manager, with responsibilities of business correspondence and upkeep of the ground, a position he held through to his death from a heart attack in May 1959. Indeed, in March 1950, when Glenavon approached the Belfast Celtic board to secure Scott's release so that he could take the management reigns at Mourneview, their approach was rebuked. This left open one question – did the board intend for Belfast Celtic to return? 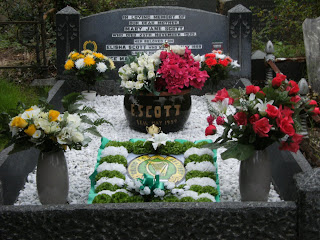 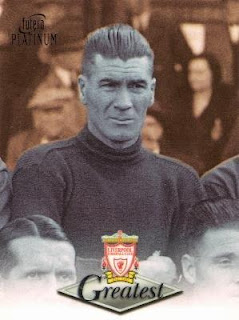 By George Glass. Grave photograph courtesy of Liz Hargreaves, Elisha's niece, who arranged for the plot to be refurbished along with the Belfast Celtic Society.

Anonymous said…
Elisha Scotts older Brother William (Hilly) Scott died in Liverpool, dont know when or actually where? can anyone help out? Elisha Scott is gone 50 years 16th May 2009, I look after his grave in Belfast, so can anyone find this important info on Billy for me, I'd be very grateful, thank you who ever reads this message Elizabeth Hargreaves Belfast N.Ireland. YNWA Elisha & Billy Scott.
Saturday, January 24, 2009

jcd said…
Elizabeth, if you contact me directly via email at jcd.nifg(a)gmail.com [replace (a) with @] I will arrange for you to receive the information that you have requested.

goughy88 said…
Hi, my name is Adam Gough, my grandfather is billy wright, elisha Scott is related to our family, not sure on the full details.. we r from carrickfergus in northern Ireland but migrated to Australia in the late 60's, I'm only 23 but love my football to know elisha's blood runs in my veins is a great privledge...glad u have kept his memory alive.
Saturday, October 08, 2011

Anonymous said…
Can anyone tell me the colours Broadway United played in?
Saturday, November 12, 2011

jcd said…
I'm afraid I don't know what Broadway United's colours were. I've asked over at the ILS forum. I'll add anything I find out here.
Saturday, November 12, 2011

hnisc said…
Elisha's nickname was the 'Black Panther' as he wore a black sweater rather than the gold ones worn by most goalkeepers of the period.
Monday, March 24, 2014

hnisc said…
Elisha was keeping goal for Belfast Celtic in a match against Distillery at Grosvenor Park. Elisha made a ling clearance and was strolling back into his goal when the ball flew over his head into the net. Danish Distillery player Hafekost had returned the ball first time from almost halfway ie. 50 yards!
Monday, March 24, 2014

Unknown said…
Can anyone help? I'm after an image of the medal the players recieved for winning the league 1921-22
Monday, December 21, 2020