One of the Irish League's most prolific goalscorers between the Wars, Sammy Curran's feats infront of goal brought a host of medals and representative honours his way...


Biography:
“Blind Sammy” Curran (so-called because he only had eyes for goal!) was one of the stars of the Irish League in the 1920s. He made headlines as goal-getter with Carrick-based intermediate club, Woodburn, and brought the attentions of the Irish League’s top clubs. Belfast Celtic won the race for his signature, usurping Linfield at the last minute.

Curran made his Celtic debut in 1-0 defeat at the hands of Glenavon on 22 August 1925, but it was to be one of the few lows in a startling first season in senior football. Curran found the back of the net on 51 occasions as the Gibson Cup (Irish League), Irish Cup, Gold Cup, City Cup and Belfast Charities Cup (shared with Glentoran) all returned to Paradise. Individual highlights included a hat-trick in the 3-2 Irish Cup final victory over Linfield and a brace in a 4-2 friendly win against Glasgow Celtic on Easter Monday 1926. Impressive club form also brought Curran representative honours. He scored on his Inter-League debut in a 5-1 defeat by the Football League in October 1925, and scored two on his first outing for Ireland in a 3-0 win over Wales.

Over the next few seasons Curran couldn’t stop scoring, as Belfast Celtic went on to claim four consecutive League titles, plus further successes in the City Cup and the Co. Antrim Shield. In 1928 he was chosen to lead the line as Ireland faced France in Paris. Four days later he scored the only goal in a famously hard-fought win over Scotland in Glasgow - it was Curran's own dazzling play that made the goal too. An Elisha Scott inspired defensive performance allowed the Irish to hold on.

Having scored over 170 goals for Celtic, Curran moved on to Derry City, playing in their first match as a senior side on 22 August 1929. Two days later he had the honour of scoring the clubs first senior hattrick, as Derry came back from 5-1 down against Portadown, only to lose 6-5 to a late goal. Curran finished his first season at the Brandywell with 35 goals in 39 appearances.

In 1931 Curran moved closer to home, signing for Bangor. The club struggled during Curran’s first season, finishing bottom of the Irish League, five points behind Glenavon. A personal highlight for Curran though was a hattrick back at the Brandywell, although the final score of Derry City 7, Bangor 4 no doubt took some of the gloss of the achievement. Ironically, Bangor had been the main rivals of Woodburn during their Intermediate League days. Indeed, Curran had scored for Woodburn in the 1923 Steel & Sons Cup Final against the Seasiders, the replay being marked by controversy as Bangor won 2-0.

On retiring from playing, Sammy Curran settled in Bangor, where he bought a sweet shop. 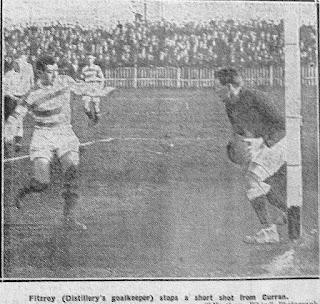 * Work by the Belfast Celtic society and the Curran family has recently established Sammy as the scorer of this goal (as recognised by the Irish FA). Previously it had been credited to Jimmy Chambers.

jcd said…
Hi, sources do conflict on the scorer of this goal. I've credited it to Chambers as per the match report at http://www.londonhearts.com/scores/images/1928/1928022503.htm. The uncertainty may come from the "scramble" from which the goal was scored.
Tuesday, December 20, 2011