A player who was at the centre of one of the biggest scandals in Irish football, Jobby Crossan honed his game on the Continent before returning to make a delayed impact on the English game…

Biography:
When John “Jobby” Crossan signed amateur forms with Derry City as a fourteen year-old, his elder brother Eddie was already an Irish international, and established in English football. Johnny spent his days working in a local record-player factory, but it was soon clear that he had a big future in the game. Sheffield United, Stoke City, Nottingham Forest, Birmingham City and Sunderland all made offers for the talented young forward, but Crossan declined. All the negotiations and wrangling put a strain on Crossan and Derry City’s relationship, and his form slumped as the relationship deteriorated further. At this point Coleraine stepped in to sign him as an amateur. Derry were unhappy at losing one of their most valuable assets for nothing, and contacted the four British F.A.s and Leagues with serious accusations. It was to be some time before the contents of the letters that were sent came to the public’s attention.

Crossan’s form picked up at Coleraine, and in October 1958, Bristol City manager Peter Doherty had his £7,000 offer accepted. When Bristol City had their attempt to register Crossan with the Football League rejected the contents of Derry’s letter came to light. It detailed a payment arrangement between Crossan and Derry which would have earned the player £3,000 had he moved directly to an English club – as an amateur he was entitled to a maximum of £750 – and also payments for expenses which were also forbidden. It was an all too common example of “shamateurism” within the Irish game. With his immediate hopes of a move to England scuppered, Crossan had to wait until the end of January to hear the extent of his punishment. Derry City were to be fined £256 for making the illegal offer and payments, Coleraine were given a £5 fine for a purely “technical” offence, and Crossan was to be banned for life from British football. It was a punishment that could have been even worse had Coleraine chairman, and future Irish FA President, Sammy Walker not intervened to have the ban limited to the Home Nations. He threatened to reveal more serious problems within the local game if the IFA did not show some degree of leniency towards young Crossan.

Having had his appeals rejected, Crossan was forced to seek a career on the Continent. In August 1959 he signed for Dutch club Sparta Rotterdam. Although he was still a part-time player, he worked during the day at Rotterdam docks, he was perhaps fortunate to be away from the constraints of the maximum wage, and was earning a healthy wage. He also learned to speak French, German and Flemish, and, to his astonishment, was called up to the Northern Ireland team in November 1959. It was a selection frowned upon by the English and Irish Leagues, but on 11th November Peter Doherty included him in a ’B’ International against France, and a week later, in a Home Nations tie against England. Throughout his Full debut he was goaded by the English players, and eventually found himself booked for an over-zealous tackle on Ron Flowers. It would be three years before Crossan would represent his country again.

In 1961 Crossan moved to Belgian giants Standard Liège in a £10,000 deal, all the while representatives of Coleraine continued to seek a pardon from the Irish League. In 1962, en route to the World Cup Finals in Chile, IFA President Harry Cavan held a conversation with Sunderland Chairman and England selector Syd Collings. Collings made clear his desire to make Crossan a Sunderland player, and wondered if there was some way in which the ban could be lifted. With Cavan’s backing and a favourable letter to the Irish League, Collings was able to ensure Crossan’s return to the UK, and secured the player in a £27,000 deal.

Almost immediately on his return to British football, Crossan was awarded an international recall. He marked the occasion, a European Nations Cup clash against Poland, with perhaps the pick of his ten international goals. A Billy Bingham cross from the right found Crossan on the edge of the box and he struck the ball at waist height with his right foot. The stunning 25-yard volley sailed into the goal at the Kop end, setting Northern Ireland on the way to a 2-0 win.

At Sunderland too the successes were rapid. In his first season he scored twelve goals in 24 League games as Sunderland just missed out on promotion from Division Two on goal average. The following season he scored 22 times as Sunderland clinched runners-up spot, and a return to top-flight football after a six year absence. In Division One things weren’t so rosy for Crossan, and mid-way through the 1964/65 season he returned to the Second Division in a £40,000 move to Manchester City.

At City he started slowly and a car accident in the summer of 1965 might have ended his career permanently. The 1965/66 season saw the appointment of Joe Mercer as manager with Malcolm Allison as his flamboyant assistant. They installed Crossan as captain, and deployed him in a deeper “midfield” role. He developed into an accomplished all-round midfielder, tough-tackling, but skilful to boot, and he finished as City’s second top scorer with thirteen goals as the Second Division Championship was won in 1966. Back in the top-flight Crossan was a virtual ever-present, scoring eight goals despite being troubled by knee injuries and appendicitis. He was however missing some of his previous sharpness, and his commitment to the City cause was called into question. The 1967/68 season would see City crowned League Champions, but by then Crossan was long-gone, joining Middlesbrough for £30,000 in late August 1967.

Crossan’s international career ended in October 1967, when he captained the Irish in a famous 1-0 defeat of Scotland at Windsor Park. The game was of course famed for George Best’s exemplary performance, but the Scots recall equally the performance of their ‘keeper Ronnie Simpson, who pulled off a number of miraculous saves, including from a Crossan penalty. However, Crossan could look back with great pride on an international career that brought 24 Caps and ten goals, including a hat-trick against Albania in May 1965, and two goals from the penalty spot as Uruguay became the first South American visitors to Windsor Park in April 1964, suffering a 3-0 defeat in the process.

Crossan spent three years at Middlesbrough, as the club consistently challenged at the top end of the Second Division, just failing to make the jump to Division One. In his time at Ayresome Park he never quite reached his previous levels of performance as he was again troubled by injury and illness, undergoing abdominal surgery and receiving medical treatment after a severe bout of insomnia. Following his release in 1970, Crossan returned to Belgium with Third Division KSK Tongeren. He helped Tongeren to promotion at the first attempt, and by the time he left Belgium for good in 1975 they were an established Second Division side.

With his senior footballing career behind him, Crossan returned to his native Londonderry where he bought a pub and later a sports shop. He also continued to pull on his boots for junior club Foyle Harps into his mid-forties - even in his 70s he still plays a couple of times a week! Later, looking back on his controversial career, Crossan showed no regrets. “…that ban could have been a blessing in disguise… I was with some of the finest clubs on the continent, playing against the cream of Europe. I was making a bob or two and broadening my education at the same time… A transfer to an English club from Ireland could so easily have led to oblivion.” 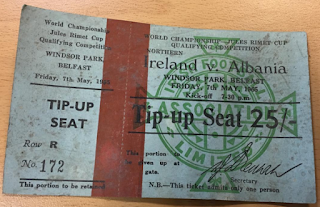 Anonymous said…
In the summer of 1967 while working in a remand home outside Carlisle, England, I was advised that a fellow from Nothern Ireland with ‘my’ last name had made a name for himself playing what we in America still call soccer. What I knew of my Irish roots was that my great grandfather had come from Letterkenney, not far from the home of this fellow Johnny Crossan. I also understood that we Crossons in America started as Crossans (and perhaps even McCrossan’s) in Letterkenny. The folks at the remand home said Johnny Crossan kept a pub in Edinburgh, which I found while visiting there late that summer. Johnny Crossan was behind the bar…. or so the fellow said. I was 17 at the time and got fed free beer the entire evening after telling Johnny who I was. I’m wondering if Johnny might recall this meeting with a Crosson from America.
Tuesday, February 12, 2008

Anonymous said…
i was in standard liege stadium when you score two times against glasgow rangers in the fourth final of champions league 1962. its for me impossible to forget it.i was ten years old and it remains one of the best moments of my life. johnny what happens for you now? do you come sometimes in liege? may be when you come i would like to meet you only a few minutes. so much respect for your mentallity. do you remember roger claessen? there is a big picture of him at the entry of standard. he is also unforgetable for thousand of people,like you. respect.
Tuesday, February 12, 2008

keith said…
I support manchester City and Johney Crossan was a great great player for us, I know it was a long time ago, but I still remember some of the things he did, including one of the last goals he scored against Leeds United , when he put their defence on their back side and scored, great great player.
Friday, July 16, 2010