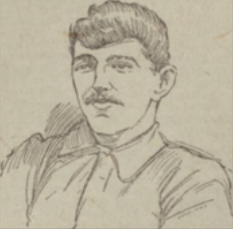 Biography:
Joe Connor, the son of a serving soldier, was born in 1877 in Philipstown, Kings County, Ireland. He remained in Ireland with the Gordon Highlanders until 1892, when the regiment moved to England. In 1898 while playing for the Gordon Highlanders he was signed by West Bromwich Albion as an amateur, turning professional the following month. In a little over a season with Albion he played ten games on the right-hand side of attack, winning praise for his grace and methodical approach.

Normally an inside-right at club level, all three of Connor's Irish caps were earned leading the attack. He scored within nine minutes of his debut in a 2-0 win over Scotland in March 1903, and retained his place for the next two Home Nations matches. His first two international appearances came whilst on the books of Brentford, and his final cap while a Fulham player.

In September 1905 Connor signed-up to John Tagg's National Football Agency, a body that was at odds with the FA. Tagg arranged a "team of English internationals" to travel to the continent, among them was Connor. On his return from the tour he was served with a ban, before resuming his playing career.

* Much work has been carried out by George Glass and Martin O'Connor to establish the exact details of "Joe Connor". He was first registered with the FA as "Michael Joseph O'Connor" on 1st January 1898 on signing for West Brom. Many sources list variations on his name and place of birth, but a cross-reference of various sources has led to the details as listed above. NIFG is incredibly grateful to George and Martin as ever for sharing their work.

Alex White said…
Joe Connor did not play for Colne, Blackpool and Treharris this was a different Joe Conno. George Glass informed me that he was born O'Connor.
Alex White (Fulham FC)
Wednesday, January 12, 2011

jcd said…
Hi Alex,
I've looked over the extensive information George supplied me regarding Connor and I have missed the fact he was born O'Connor - now fixed. I have also removed the latter teams from his playing career.
Thanks, Jonny
Wednesday, January 12, 2011