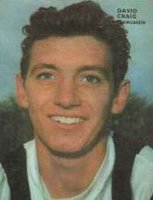 One of the finest defenders of his era, Dave Craig's injury problems curtailed his international career, but didn't prevent him from featuring in a number of sucesses for Newcastle United...

Biography:
Recognised by many judges as one of the finest defenders of the sixties and seventies, Dave Craig was most at home at right-back, but also shone on the left or in the centre. Craig had played Boys’ Brigade football as a youngster, and had had a trial with Scunthorpe before signing as an apprentice with Newcastle in August 1960. At the time St James’ Park boasted two other Irish full-backs, Alf McMichael and Dick Keith, who took the shy and homesick youth under their wing.

In 1962 Craig was a part of Newcastle’s FA Youth Cup success; Wolves defeated 2-1 in the final. Suitably impressed by the young defender’s performances, Newcastle manager, Joe Harvey, awarded him his first start away to Bournemouth in a League Cup tie in November 1963, and his League debut three days later in a 4-0 defeat by Cardiff. From 1964/65, and for the next twelve seasons, Craig was a regular in the Magpie’s starting eleven when fit.

Craig’s first season as a regular saw Newcastle claim the Second Division title, and promotion back to the top-flight after a four year absence. In 1969 he helped Newcastle to a Fairs Cup success, though he almost missed the final against Újpest Dózsa through a knee ligament problem. Five years later he did miss the FA Cup final defeat by Liverpool with a dislocated shoulder (although he was awarded a medal after appearing in eight matches en-route to the final), and in 1976 damaged medial ligaments forced him to miss the League Cup final defeat by Manchester City. Craig did though claim further winners’ medals as Newcastle took the minor cups of the early 1970s by storm. In 1972 they won the Anglo-Italian Tournament, with Craig scoring the winner in the 2-1 final defeat of Fiorentina. The following year he appeared in the Texaco (British Isles) Cup final win over Burnley. He missed much of the 1974/75 season, but did make an appearance in the first leg of the Texaco Cup Final defeat of Southampton.

As with his club career, Craig’s Northern Ireland cap total was severely curtailed by his persistent injury problems, and latterly by the emergence of a number of top-flight full-backs such as Rice, Nelson and Nicholl. Craig made his international debut in Bertie Peacock’s last match in charge, as Northern Ireland sought a replacement for the ever-consistent Jimmy Magill. He was a regular right-back in Billy Bingham’s team that just missed out on qualification for the 1970 World Cup. Most of his games under Terry Neill were as left-back, with Rice by then first-choice on the right-hand side of defence. In 1973, Craig was part of the Shamrock Rovers “All-Ireland” XI that was defeated 4-3 by Brazil in Dublin.

A crowd of 21,280 attended Craig’s testimonial match in 1975, before he brought his top-class career to a close in 1978. A one-club man, he made a total of 435 first-team appearances for Newcastle, one of only seven players to pass the 400 mark for the club – had it not been for injuries his total could have been around 600! Joe Harvey described Craig as “almost the complete full-back”, dependable and able to recover quickly when in defence, intelligent and positive going forward. A thorough professional and steady character, he never gave his manager a problem.

On leaving St James’ Park, Craig played briefly for Blyth Spartans, and later for a number of local non-league teams. He also tried his hand at a variety of business ventures in the north-east of England, including as a milkman, a newsagent and running a heating firm. Latterly he has acted as a care-worker.