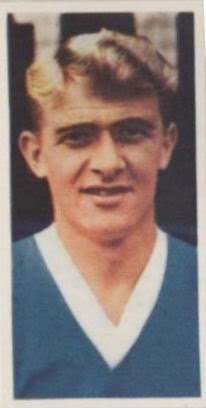 Long before Martin O'Neill and Neil Lennon, an Ulster-man made significant ripples as a successful manager in Scotland. Unsung hero of the 1958 World Cup squad, Willie Cunningham also proved himself an effective and versatile performer in Northern Ireland’s back-line…

Biography:
Mallusk-born, but Scotland raised, Willie Cunningham arrived in senior football with St Mirren from Ayrshire based Junior club, Ardrossan Winton Rovers in 1950 having previously played for the RAF when in the services. He made his Scottish League debut in October 1950 against East Fife, quickly establishing himself as first-choice left-back. A fans’ favourite, his uncompromising, tough tackling style of play also brought him to the attention of the Irish selectors. In March 1951 he won the first of his thirty caps, and over the next few seasons he alternated between left-back and right-back in the Northern Ireland team, before making the number two shirt his own in the mid-1950s.

After failing to regain his regular place following injury, Cunningham departed St Mirren in November 1954, signing for Leicester City in a £4,750 deal. At the time Leicester were struggling at the wrong end of the First Division, and were relegated at the end of Cunningham’s first season. Two years later Leicester marched to the Division Two title, scoring a club record 109 goals. Back in the top-flight, Leicester struggled once again, breaking another club record by conceding 112 goals, but somehow survived, finishing just one point off a relegation place.

On the international front things were going somewhat better for Cunningham. He played in every match of Northern Ireland’s successful 1958 World Cup qualification campaign as the team conceded just three goals in the face of talented Italian and Portuguese forward lines. With Jackie Blanchflower unavailable for the Finals tournament after the Munich disaster, Peter Doherty turned to Cunningham as stand-in centre-back. Although it was a largely unfamiliar role, Cunningham played all but two of his remaining fourteen internationals in the centre of defence.

In September 1960, Cunningham returned to Scotland to play for the Jock Stein managed Dunfermline in a £1,850 deal. Dunfermline, traditionally one of the poor relations in Scottish football, were challenging for the top honours under Stein. At the end of his first season at East End Park, Cunningham had in his possession a Scottish Cup winner’s medal, having played in seven of Dunfermline’s eight Cup matches, including the replayed Final success, 2-0 over Celtic. The following season, the club’s first in Europe, the Pars made it to the quarter-finals of the Cup Winners’ Cup. The following season’s Fairs Cup opener matched Dunfermline with Everton, and Stein employed Cunningham as sweeper in the home leg, probably the first time the sweeper system was used by a British team. It was a tactic which proved successful as the English club were defeated 2-0 at East End Park, and 2-1 aggregate.

By the early sixties Cunningham had seemingly fallen out of the international reckoning, with Terry Neill installed at centre-back for Northern Ireland. Of course his versatility meant that when Peter Doherty needed a left-back, Cunningham returned to the team. Recurring injuries ended Cunningham’s playing career during the 1963/64 season, and when Stein left to manage Hibernian, Cunningham was appointed his successor in March 1964.

Willie Cunningham took to management almost immediately, and in 1964/65 took Dunfermline to within a whisker of the double, losing out in the Scottish Cup Final 3-2 to Celtic, and finishing just a point behind champions Kilmarnock in the League. So impressed were the Scottish FA that they offered Cunningham the International team manager’s post, but he turned them down. In June 1967 Cunningham resigned as manager of Dunfermline, later taking charge at Falkirk and then at St Mirren from 1972. With St Mirren struggling to break out of the Second Division, Cunningham tendered his resignation early in the 1974/75 season. Before he left the board reportedly asked him to suggest a replacement, the name he put forward was that of a young manager learning his trade at East Stirling by the name of Alex Ferguson.

Willie Cunningham settled in Dunfermline, where he ran a local sports shop for a number of years.