One of the few players to survive the era of Best and Dougan through to the successes of the early 1980s, but for injuries Cassidy may have earned more that his 24 caps…


Biography:
As a teenage striker Tommy Cassidy made an impressive impact on the Irish League. In 1969, after just a handful of senior appearances, he scored a hat-trick in the City Cup Final, as Glentoran saw off Bangor 7-1. Early the following season, having found the net four times in just six appearances, Newcastle United came calling with a £15,000 bid. In October 1970 Cassidy found himself at an English First Division club after just fourteen senior outings for Glentoran.

Although Cassidy’s Football League début didn't take long to arrive, he made his first appearance in a 2-0 defeat at Southampton on 7th November 1970, he had to wait three seasons to establish himself in the Newcastle first eleven. Prior to establishing himself, a rare senior outing was made in the 2-1 1973 Anglo-Italian Cup Final defeat of Fiorentina. By that time he was playing more normally as an attacking midfielder, and in his first season as a regular (1973/74) he helped Newcastle to a Texaco (British Isles) Cup Final victory over Burnley and an FA Cup Final appearance against Liverpool. The following season Cassidy was troubled by injury and made just nine League appearances, though he did play in the first leg of the Texaco Cup Final as Newcastle retained the trophy 3-1 on aggregate against Southampton. The following season Newcastle were back at Wembley for another final, losing out 2-1 in the League Cup to Manchester City.

Cassidy’s Northern Ireland career had begun at the end of his first season in English football, coming on as a substitute for Eric McMordie in a 1-0 Home Nations defeat by England. The following season he made a further substitute appearance in a 1-1 European Championship Qualification match against the Soviet Union. As with his club career he had to bide his time before establishing himself in the international set-up. The real breakthrough with Northern Ireland came in 1973/74 as well, he marked his fourth cap, his first as a starter, with the only goal in a 1-0 win over Scotland. It was to be his only international goal, and the last time he was on a victorious Northern Ireland team until 1979.

Through the mid-1970s, injuries permitting, Cassidy was a regular in the Northern Ireland team, until a falling out with Danny Blanchflower saw him banished from the set-up for two years. He did however return to favour for Blanchflower’s last few matches, starting in a 5-1 defeat by England at Wembley, and coming off the bench during a 1-0 victory over the Republic at Windsor Park.

Groin, knee and ankle injuries had taken their toll on Cassidy’s pace, and by the time Billy Bingham was appointed Northern Ireland manager in 1980, Cassidy was more at home as a defensive midfielder. Bingham used Cassidy in this role for each of his first nine games in charge, thus allowing the likes of McIlroy, Brotherston, Finney and O’Neill to make a suitable attacking impact. He played an important role in Northern Ireland’s 1980 Home Nation Championship success, helping bring the old trophy back to Belfast for the first time in 66 years.

A £30,000 move to Burnley, freshly relegated to Division Three, in the summer of 1980, did not initially harm Cassidy’s international career, but over the following few seasons it became clear that Bingham was favouring players featuring regularly at a higher level. A few moments of glory in green remained however. In November 1981 he was called-up to replace Martin O’Neill for the final World Cup Qualifier against Israel, a must win game to insure a place in Spain. Sure enough, Northern Ireland won 1-0, and Cassidy travelled with the squad to the Finals. In Spain he made a single appearance, coming off the bench for the injured Sammy McIlroy, and helping to steady ten-man Northern Ireland, during the historic 1-0 win over the hosts. Spain brought the curtain down on Cassidy’s, somewhat up-and-down, international career in the most glorious of fashions.

Having helped Burnley to the Third Division title before travelling to Spain, Cassidy brought his Football League career to a close in 1983, before moving to play for APOEL in Cyprus. He later managed the club, leading them to the Cypriot League Championship, but left when he blew the whistle on high-level corruption in the game. He returned to the north-east of England to manage Gateshead, and was linked with the Newcastle job in 1992 prior to the arrival of Kevin Keegan. In 1994 he returned to the Oval as manager of a demoralised Glentoran, and helped them to an early success in the Gold Cup. The rest of his time with the Glens proved difficult, with high-profile cup final failures and expensive transfer flops such as Liam Coyle being tempered only slightly by an Irish Cup Final win over Glenavon in 1996. Under pressure from the fans, Cassidy left Glentoran in December 1997.

In 1998 Cassidy was appointed manager of Ards, but was sacked in October 1999 when the board weren't satisfied with their prospects of promotion from the First Division – they were second at the time. Less than a month later Cassidy took charge of League of Ireland Sligo Rovers, but couldn't save them from relegation from the Premier Division at the end of his first season. Sligo just missed out on promotion the following year when they lost the final match of the campaign 4-1 to Home Farm, and Cassidy left the club that summer. He briefly scouted Irish League players for then Northern Ireland manager Sammy McIlroy, before returning to management with Northern Premier League Division One club, Workington. He guided the Reds to promotion to the Premier League in 2004, and runners-up spot the following season saw the club promoted to the Football Conference Northern Division. He left Workington in 2007 and briefly managed Newcastle Blue Star. In October 2010 he was appointed boss at Northern Premier League side, Whitby Town. He left Whitby twelve months later, but wasn't out of work for long as he joined Conference North side Blyth Spartans in December 2011. He was sacked the following October.
Cassidy has remained in the north-east of England, penning regular newspaper columns about Newcastle United and football in general. In 2017 he was diagnosed with Alzheimer's disease. 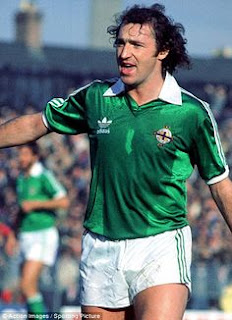