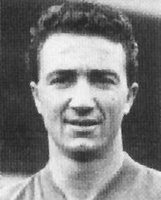 A midfield dynamo, the diminutive Tommy Casey was an "all-action midfielder with an infectious approach to every game" and a versatile asset to Northern Ireland through the glorious ‘fifties…

Biography:
A product of Belfast junior football, Tommy "Cast Iron" Casey moved into senior football as an amateur with Bangor. Because of his amateur status, Bangor received no fee following his move to Leeds United in May 1949. A year at Elland Road brought little success for the dynamic midfielder, and he was allowed to leave in August 1950, signing for Division Three (South) Bournemouth.

Two seasons with Bournemouth allowed Casey to come to terms with life in English football, and in August 1952 he joined First Division Newcastle United for £7,000 on the recommendation of Bill McCracken. At St James’ Park Casey was never really a guaranteed starter, although he was always reliable when called upon. Usually a tough-tackling left-half, he was also more than capable of playing in a creative role, evidenced by his selection when required in the forward line. In 1955 Casey played in six of Newcastle’s matches as they won the FA Cup, but it was only after left-half rival Charlie Crowe strained angle ligaments the week before the Final that Casey’s place in the team was assured.

Casey made his international debut against Wales in April 1955, stepping in as deputy for Bertie Peacock. Over the next three years he found himself in-and-out of the side, making way when Peacock was available. He did play in three games during Northern Ireland’s successful 1958 World Cup qualifying campaign, scoring in the 3-0 win over Portugal at Windsor Park. At the finals he played twice, both times in the forward line, as Peter Doherty searched for a reliable goalscorer.

On returning from Sweden, Casey signed for Portsmouth for £8,500. He maintained his place in Northern Ireland’s forward line for the first international of the season, wearing the number nine shirt he scored in a 3-3 draw with England. Eleven days later he played his final international, back as wing-half, as Northern Ireland were hammered 2-6 by Spain in Madrid.

After a less than a season at Fratton Park, during which Portsmouth barely escaped relegation from the First Division, Casey was signed by Bristol City, then managed by Irish-boss Peter Doherty, in a £6,000 deal. He was a popular figure at Ashton Gate, but could do little to save City from relegation to Division Three in 1960. After four years Casey left Bristol City to become player-manager of Gloucester City.

Tommy Casey remained in the Bristol-area until his death in a North Somerset nursing home in January 2009 at the age of 78. He was fondly remembered by teammates as an inspiration and a fine example to young players.

Anonymous said…
RIP Tom you where a great manager for us at Grimsby and Introduced a lot of excellent youngster to the team.
Wednesday, January 14, 2009