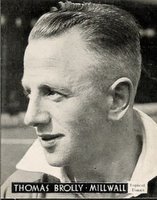 Nicknamed "The Professor", Tom Brolly would not counternance recimination among players during a game. He never funked a tackle and believed in getting the ball forward without the use of a big boot...

Biography:
Tommy Brolly, an ex-linen worker, was a nephew of Sam Brolly a pre-First World War player with Aston Villa. His career began with the leading Intermediate club of the age, Crusaders in the latter half of the 1931/32 season. He guested with Sheffield Wednesday during their tour of Ireland in May 1933 and was invited to Yorkshire to play in a Yorkshire Cup match. His "trial" proved successful and he signed for Wednesday for the 1933/34 season.

Brolly’s time at Hillsbrough proved unfruitful, and after just two first-team outings he was signed by fellow Ulsterman Bill McCracken for Millwall during the 1934/35 season. Over the next fifteen years, Brolly proved to be a calm ball-winner, initially at wing-half, and later at centre-half.

In 1937 Millwall reached the FA Cup semi-finals, the first club outside the top two divisions to do so in the modern age, and the following season the club claimed the Division Three (South) title. By this stage Brolly had already claimed a place in the Ireland team, winning two caps against Wales in 1937 and 1938. During the 1938/39 season he added two more, including in a 7-0 drubbing by England at Old Trafford. That same season, on 29 October 1938, King George V attended Milwall's match at Norwich City - Brolly scored in a 2-0 win, one of just nine league goals he scored in his career.

In September 1939, when War was declared on Germany, Brolly volunteered and became an instructor for the army. He continued to play for Millwall in War-Time fixtures when available, but missed their 1945 War Cup South match at Wembley. Brolly had also fulfilled the position of player-coach at Windsor Park between November 1940 and April 1943. In one infamous moment, broke the leg of Glentoran's Tony Wilkins in a strong tackle.

While with Linfield Brolly played in two Irish Cup Finals. The first, in 1941, was lost 1-0 to Belfast Celtic. A year later Glentoran were defeated Glentoran were defeated 3-1 in the decider and a week later the County Antrim Shield was added too with a 2-0 win over Larne. 1940/41 and 1941/42 proved Brolly's only full seasons with Linfield and during this time he was an ever-present in the Northern Ireland Regional League team in matches against the League of Ireland and the British Army.
..
Brolly was rarely available to play football through 1942/43 and only made four appearances for Linfield from December 1942 to April 1943. On one of those occasions he was responsible for Linfield's expulsion from the Irish Cup, being deemed ineligible for the January 1943 match gainst Distillery as he had not been resident in Northern Ireland for the previous two weeks. Distillery too were disqualified for fielding Matt Redmond who was ineligible having played Summer Football!

By the time a full League programme resumed Brolly was 34 years-old, and his career was winding down. Appointed captain at Millwall, he could do little to prevent their relegation from Division Two in 1948, and he was released by the club at the end of the 1948/49 season. Brolly however refused to go, and he played an important role in steadying the team’s defence the following season, finally retiring in 1950.

With his playing days behind him Brolly coached at Crystal Palace in the early 1950s, and was part of Bobby Robson’s coaching staff at Ipswich Town through the 1960s and ‘70s.

Additions and corrections by George Glass.