One of the most consistent players in the English lower Leagues throughout the 1970s, Ronnie Blair's reward was five caps for Northern Ireland...

Biography:
Ronald Victor Blair started his career under the tutelage of Bertie Peacock at Coleraine. In 1966 he was signed initially as an amateur by Oldham Athletic, then managed by Jimmy McIlroy, who beat off competition from a number of top clubs. After four seasons at Boundary Park, in which he played 80 league and cup games, Blair signed for Rochdale in March 1970.

Following two seasons with Rochdale, Ronnie Blair returned to Oldham in August 1972, and in the 1973/74 season he helped them to the Division Three Championship, scoring a personal best eleven goals. In 1979 Blair was awarded a testimonial when an All-Ireland Select played Oldham at Boundary Park - fair reward for a player who made close to 400 appearances for the club. In 1981, having been Oldham's only ever-present, he signed for Blackpool before finishing his career with a brief spell back at Rochdale. 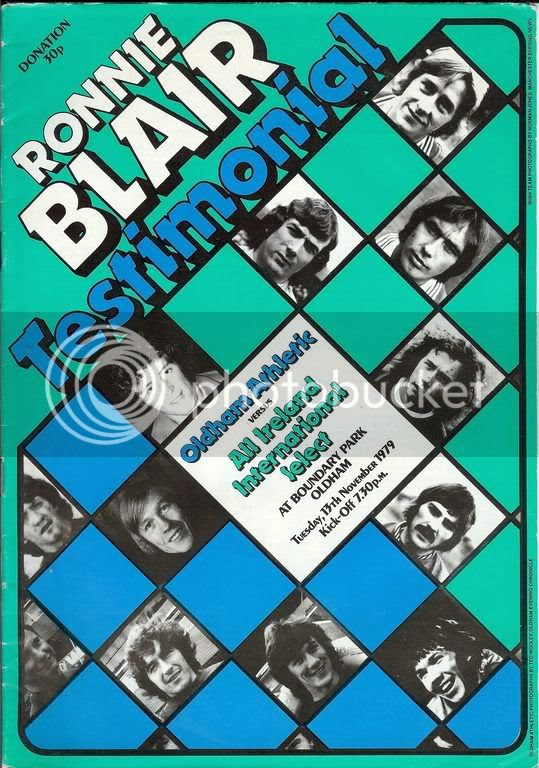 Ronnie Blair’s versatility saw him play League football in every defensive position and in midfield. His dash, determination and constructive play earned him a call-up to the Northern Ireland team early in the 1974/75 season, and over the next two seasons he won five caps.

The end of Blair's professional career was hastened by his business commitments as a director of a printing firm. He did remain involved in the game through to the early 1990s as coach then manager at Castleton Gabriels and manager of Bacup Borough.