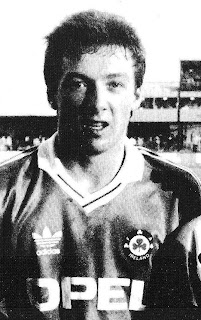 Following in his father’s footsteps into the Northern Ireland side, Liam Coyle then recovered from serious injury to embark on a long and glittering career with Derry City…

Biography:
Liam Coyle burst onto the League of Ireland scene during the 1988/89 season. He scored a hat-trick against Cobh Ramblers on his debut, was crowned Young Player of the Year, finished the season as “Treble” winner with Derry, and was capped by Northern Ireland in an end-of-season friendly with Chile (following in the footsteps of his father, Fay). He was unlucky not to mark his international debut with a goal, his header from a corner forcing a superb save from the goalkeeper.

The following season started brightly too, as Coyle starred in a European Cup first round tie with Benfica at the Brandywell. Benfica manager Sven Goran Eriksson immediately offered to sign Coyle on a six-month loan deal, and Manchester United were also set to make a bid. A serious knee injury however ruled Coyle out of the second leg in Lisbon. Further investigations revealed the extent of his condition – he had Osteo Necrosis, and doctors warned that if he played again he could be confined to a wheelchair.

Essentially Coyle’s career was over at 21 years-old. Derry played Newcastle United in a benefit match for the young striker, but he refused to believe that he would never play again. He travelled the world and was treated by the top consultants in their field. He made an abortive comeback with Coleraine in September 1990, but lasted just one match. Coyle then turned to a faith-healer, and in combination with heavy knee strapping, made an impressive impact on the Irish League with Omagh in the 1992/93 season. Coyle returned to Derry City in August 1993, and soon enough was showing the skills and trickery that had brought him such acclaim as a youngster. He added further FAI Cup and League Cup medals to his collection, and was Ireland’s double player of the year in 1995.

In December 1995 Coyle moved to Glentoran in a £35,000 deal, a record between Irish clubs. He was unhappy about leaving the Brandywell behind and would later describe it as the "low point" of his career. He lasted just six months at the Oval, picking up an Irish Cup medal, before being allowed to leave. Glens’ manager Tommy Cassidy put it like this, “(Coyle) is one of the most skilful Irish players in history, but he had to go - he was missing training and other players were taking note”. Coyle returned to Derry City for a combined fee of £42,000 (that also included Declan Devine), and immediately helped the Candystripes to another League of Ireland title.

As the years moved on Coyle continued to regularly find the net until the injuries began to take their toll. In 2002 he scored his only FAI Cup Final goal in his fifth appearance, as Derry defeated Shamrock Rovers 1-0. His last ever goal for the club proved to be even more important. In December 2003 Derry found themselves in a promotion-relegation play-off with near neighbours Finn Harps. With the game in extra-time it was the 35 year-old Coyle who came off the bench to score the winner, and maintain Derry’s Premier Division status.

In January 2004, following years of playing through the pain barrier, Coyle announced his retirement from playing. He had scored a modern-day club record 113 goals in almost 400 games for Derry, and was acclaimed from all-quarters as the greatest player in their history. He stayed at the Brandywell as Chief Scout, and has since made clear his ambitions to one day manage the club.

Coyle is pictured above wearing League of Ireland shirt for an inter-league match against the Irish League.