The outstanding player of his day, Jackie Carey had the honour of captaining the Rest of the World, Manchester United and both Irelands…

Biography:
Like so many young sportsmen in 1930s Ireland, Jackie (he wasn’t commonly know as Johnny until after he moved to England) Carey was a master of Gaelic football and association football. In fact, such were the rules of the GAA at the time, Carey was banned when it was discovered he was playing a “foreign” sport. His football career had begun with the famous Home Farm as a schoolboy, before joining senior side St James’s Gate in the summer of 1936. After just two months of League of Ireland football Carey was spotted by Manchester United’s Dublin-based scout Billy Behan. Behan convinced United’s chief scout, Louis Rocca, to have a look, and it was he that agreed a £250 fee for Carey’s services in November 1936. £250 may seem like a tiny amount now, but at the time it was a League of Ireland record.

Initially Carey featured for United as an inside-left, making his first-team debut against Southampton in September 1937. A month later, on the 10th October and still just eighteen years-old, Carey made his international debut in a 3-3 draw between Eire and Norway. Having established himself as a regular in the forward line for both club and country whilst still a teenager, Carey’s career was interrupted by the outbreak of World War Two in September 1939.

During the War Carey volunteered with the British Army, serving in the Middle East and Italy, as well as guesting for a number of League clubs and with Shamrock Rovers. When the War ended he was invited to resume his career in Italy, but chose instead to return to Manchester United. Return he did, and as a more versatile player too. He began to appear at half-back for United, and as full-back too, in fact, during his time at United he played in every position except outside-right, including an appearance as goalkeeper when regular custodian Jack Crompton took ill.

In the immediate post-war season Carey was selected by the Irish FA for the first time, appearing in the Victory Internationals against Scotland and Wales – in these games he played at inside-left and right-half respectively. He resumed his Eire career too, making the right-half position his own and earning the captaincy in 1946. In September 1946 Carey appeared against England twice in three days, he made his (Northern) Ireland debut on the 28th at Windsor Park, and on the 30th he played against the same team for Eire in a 2-0 defeat in Dublin. In total the FAI awarded him 29 Caps, 19 as captain, and the IFA awarded him seven caps, one each at right-half and inside-right, two at left-back and three at right-back.

In 1947 a Great Britain team met a Rest of the Europe team at Hampden Park in Glasgow to mark the Home Nation’s rejoining of FIFA, and offer a much-needed fund-raiser for the depleted funds of World football’s governing body. Possibly eligible for both teams, Carey was selected for the European team as captain. Two years later came the crowning moment of Carey’s international career, as he captained the Eire team to a 2-0 victory over England at Goodison Park. It was the first time that England had lost to a foreign team on home soil.

At United Carey was also compiling an impressive list of honours. In 1948 he captained the team to a 4-2 FA Cup Final victory over Stanley Matthew’s Blackpool, so becoming the first ‘non-British’ player to lead a winning team up the famous Wembley steps. In 1952 he led United to their first post-war League title having finished as runners-up four times in the previous five seasons. He became the second ever winner of the Footballer of the Year title in 1949, and followed that up with a Sport Personality of the Year title in 1950.

Carey retired from playing in May 1953, making his final international appearance, back at inside-left, in a 4-0 win over Austria, and ending his United career after a total of 344 first team outings. So pleased were the Manchester United officials with Carey’s 17 years of service to the club that they invited him to a board meeting to convey special thanks to him, and offered him a place on the coaching staff. Carey declined, and that August was appointed manager by Blackburn Rovers.

In 1958 Carey guided Rovers to promotion to the First Division before being appointed manager at Everton in October 1958. His attempts at turning a struggling Everton around were not enough for the board, and he was sacked in 1961 despite taking them to fifth in the League, their highest position since the War. Appointed Leyton Orient manager for the 1961/62 season, he guided the club to the top-flight for the only time in their history, and although they were relegated after just one season, Carey had done enough to convince Nottingham Forest that he was the man for them.

Forest lifted their game under Carey’s guidance, finishing as runners-up in 1967 and reaching the FA Cup semi-final that same season. After some big-money signings, notably £100,000 Jim Baxter from Rangers, Forest fell apart and in December 1968, with the club bottom of the League, Carey was sacked. Carey returned to manage Blackburn in October 1970. However this spell brought the disappointment of relegation to the Third Division after just one season and he was again sacked.

As well as club management, Carey also took charge of the Ireland side that competed at the 1948 Olympics and was team manager of the senior Republic of Ireland side from 1955-1967. 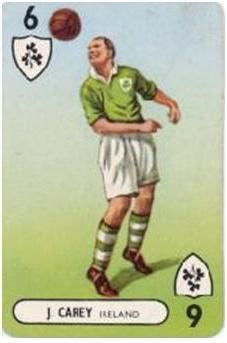 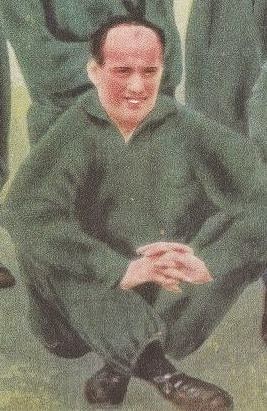