One of a number of players to turn out for both Belfast Celtic and their Glasgow namesake... 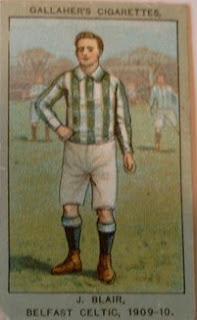 Johnny Blair came through the amateur ranks from Cliftonville Olympic to establish himself in the first team, winning an Irish League title in 1905 - when Cliftonville shared the title with Distillery following two drawn play-off matches - and picking up an Irish Cup winner's medal with a replayed final win over Shelbourne in 1907. Indeed big-match replays would not be unfamiliar to Blair through his career - each of his trophy wins required a replay to settle them.

This same period brought Blair five Irish caps, all won consecutively between February 1907 and March 1908 in the Home Nations Championship, and all ending in defeat. He lost his place at outside-right to Andrew Hunter of Belfast Celtic. Blair also played twice for Amateur Ireland, captaining them against England in December 1907.

Early in 1908 John Blair left Solitude for Belfast Celtic, but his four seasons at Paradise coincided with a rare lean period, and he missed out on adding to his medal collection. His form did however convince Glasgow Celtic to sign him up when he moved to work in the Clydebank shipyards in October 1910. Although his debut was reported to be eagerly awaited, Blair made just one appearance while in Glasgow, in a 0-0 draw with Third Lanark on 19th November 1910.

Within a month Blair had moved south of Glasgow to Motherwell, where he played six times before returning to Belfast Celtic at the end of the season. From then on Blair became something of a journey man. After a year back at Paradise, he spent brief spells with Shelbourne and Distillery, and finally a season back with Cliftonville before retiring in 1915.

Although he played the vast majority of his club career as an attacking right-winger, Blair was far from a prolific goalscorer. He managed 16 goals for Cliftonville and just eight for Belfast Celtic and only once managed more than one in a single match. The only brace he scored was in Belfast Celtic’s 2-1 defeat of Cliftonville on 24th April 1909 in a City Cup match.

Later Blair served as President of the Irish League in 1921/22.