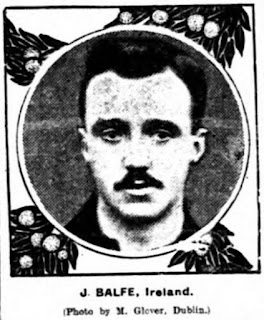 Biography:
A sound reliable defender, Jimmy Balfe was playing with Leinster Senior League side Reginald when he won inter-provincial honours against Ulster in March 1905 and January 1906, the latter match as captain. In April 1906 he guested for Bohemians in an end-of-season friendly against English giants Aston Villa and remained at Dalymount Park for two seasons. While with the Bohs he played twice for Amateur Ireland, his first cap arriving in a 2-1 defeat by England at Dalyer on 15 December 1906. In 1908 he captained the Bohs to their only Irish Cup success, with a 3-1 replay win over Shelbourne. What was even more remarkable was that the Bohs had defeated Linfield and Belfast Celtic to reach the final.

For the 1908/09 campaign Balfe had moved to Shelbourne, and it was while a Shels player that he won his only Full Ireland recognition, stepping in for the unavailable Alex Craig of Rangers, against England in 1909. He was the only Dublin-based representative in this team. Later Sam Burnison, of Distillery and Bradford City, became Ireland's recognised right-back leaving Balfe to earn just one further cap. A badly broken leg sustained against Linfield in November 1910 was perhaps the final nail in his international ambitions. With the Shels he won a Leinster Cup winner's medal when Lancashire Fusiliers were defeated in the March 1909 final. He was also part of the team which won the City Cup for the only time in their history. In a career spanning 9 seasons he scored his only goal in Shelbourne’s 1-0 defeat of Derry Celtic in the Irish League on the 28th November 1908.

Balfe, who was born on the Shelbourne Road in the south side of Dublin but later moved with his family to the South Circular Road, was the younger brother of John Balfe who also played for Bohemians as a full-back. A brush maker by trade, Balfe's name was still mentioned in footballing circles decades after his retirement from the game