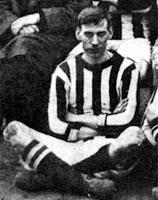 Exciting winger who had the honour of representing both the Irish League and the Southern League, as well as picking up three caps for Ireland...


Biography:
Harry Buckle came through the ranks at Cliftonville, playing for Cliftonville Casuals and Cliftonville Olympic before breaking into the first-team. He earned his first Ireland cap in the Ibrox Disaster Fund match against Scotland in August 1902 and the first of four Inter-League caps in a 3-2 defeat by the Football League on his home ground at Solitude in November 1902.

A move to professional football with Sunderland followed shortly afterwards. Buckle was slow to settle in England, a point illustrated by the following extract taken from a 1903/04 season preview:

The most important of the “captures” is that of Harry Buckle, who, although he came from Belfast Cliftonville last season, must be regarded as a new player, seeing that he was only once in the team, and then not in the presence of a Sunderland crowd. His play is forward, and it is of the best. He is 21 years of age, stands 5ft 10in, and though apparently heavily built is as active as a squirrel.

Once Buckle did break into the Sunderland side at the end of October 1903 he began to make his mark, scoring a total of ten goals in 21 appearances from outside-left. His best spell in front of goal saw him find the net six times in six matches through November and December. Tall and heavy-set for a winger, it was his "piledriver" shot that brought him most of his goals. He was also famed for his unwillingness to head the ball, instead taking it down to his feet and making use of his arms and elbows to hold off would-be tacklers.

This form also brought Buckle back to the attention of the Irish selectors, and he made his international return in a 3-1 defeat to England back at Solitude. Over the following two season’s Buckle’s form began to tail off, and he made just fourteen appearances in the 1904/05 season and ten in the 1905/06 season, before moving on to Southern League Portsmouth.

In his only season on the south coast, Buckle helped Portsmouth to runners-up spot in the Southern League, and he joined rivals Bristol Rovers for the 1906/07 season. At Bristol Rovers Buckle picked up his third Irish cap, making the short trip to Aberdare for a 1-0 win over Wales. Thus Buckle became only the second Bristol Rovers to win international recognition.

In 1908 Buckle joined Coventry City for their first season in the Southern League and was scorer of the club's first two hattricks in senior football as he finished as top-scorer for the club in consecutive campaigns. In 1909 he was appointed as player-manager, a position he held until 1911 when he made way for Robert Wallace.

Buckle was later to return to the Irish League, combining part-time football with a job at the Harland & Wolff shipyard. He won further representative honours while with Belfast Celtic in 1912 and 1913. He finished his Irish League career with spells at Glenavon and as player-manager of Belfast United. A catholic, Buckle left his job in the largely unionist shipyards following intimidation as sectarian tensions increased with the ongoing troubles. On one occasion he suffered a face injury after a bolt was thrown at him and on another he was thrown into the river.
..
After briefly moving to Wales, Buckle took a job in the Cork shipyards and then with the Ford Motor Company. He joined the works team, Fordsons (later called Cork FC) where he combined playing with managerial and secretarial duties. Just days after his 44th birthday he demonstrated that he had lost none of his skills as Fordsons shocked Shamrock Rovers to claim the 1926 Free State Cup.

With thanks to Martin O'Connor for additional details.

Kierna C said…
Thank-you for this wonderful piece about my great-grandfather.
Saturday, September 17, 2011