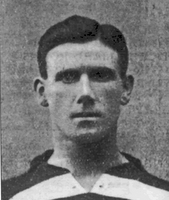 A “clean, clever, sturdy” ‘keeper of the 1920s, Frank Collins won a single Irish Cap in the face of competition from the likes of Scott and Farquharson…


Biography:
Dublin-born goalkeeper Frank Collins, "clean, sturdy, clever", came to the fore while playing junior football with Dublin club Jacobs for whom he signed in 1918. He was selected for Junior Ireland for a match against Scotland on 12th March 1921, keeping a clean-sheet in a 1-0 win at Celtic Park in Belfast (details to be confirmed/clarified).

Largely based on his performance in that match, Collins was signed by Celtic, joining up with his new colleagues for an end-of-season match in Paris with Cercle Athlétique in May 1921. The following season Collins had to bide his time as cover for regular ‘keeper Charlie Shaw, making his Scottish League debut in a 4-0 win over Dumbarton on the 6th September 1921.

Despite his lack of first-team action at Parkhead, Collins was selected for Ireland’s match with Scotland at his home ground in March 1922. At the end of the season Celtic made Collins available for transfer, and he returned to Jacobs to play in the newly formed Irish Free State League.

With Jacobs, Collins added inter-league representative honours and an Irish Free State cap, in a 2-1 defeat by Italy ‘B’, to his collection. He remained with the Dublin club until they left the League of Ireland in 1932.

Summary: 2*/0. Won 1, Drew 0, Lost 1.
* The status of both these games is under question. Collins may have either 1 or 2 caps depending on the definition of "Full International".